Elderberries are a wild hidden gift from the mountains 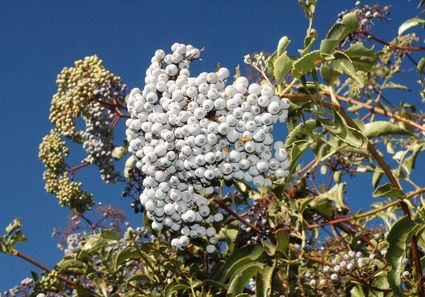 Ripe elderberries hang thick on a bush, while other clusters in various stages of ripeness are visible in the background.

While the cultivated crops ripen in the valleys below, there are some wild fruits growing in the mountains that also ripen in August and September. Among the best of these are the tiny but useful blue berries produced by elderberry shrubs, which have long been prized by wildlife, Nuwä (Kawaiisu or Paiute) Indians and settlers.

Though elderberries are very tart, they can be eaten raw, but the best use for them may be to make beautiful and delicious elderberry jelly. Even with the requisite sugar added, this wine-colored jelly retains the flavor and some of the teasing tartness of the wild mountain berries. Elderberries are found throughout the Tehachapi Mountains, especially in wetter areas near creeks and springs, but they are not confined to only areas with ample water – some big specimens can be found growing along Banducci Road far from any creeks.

The blue elderberry (Sambucus nigra ssp. cerulea) is a woody shrub that averages about six to ten feet in height, though it will occasionally get a lot taller. The easily recognizable cream-colored, flat-topped flowers were boiled to make a tea that was used by the Tehachapi Indian people as a treatment for headaches, fever and colds. Elderberries' fruit production is not closely synchronized – at times in the growing season they may have ripe berries, green unripe berries and even blossoms all on the same plant.

The berries are an important food source for many different kinds of wildlife. Birds, in particular, love the small berries and elderberries are eaten by band-tailed pigeons, mountain quail, California quail and many others. Some insect eaters, like western bluebirds, will switch to eating elderberries late in the year when insects are scarce. Bears, coyotes, foxes, raccoons and other mammals also feed on elderberries.

The Nuwä make traditional clapper sticks, a basic percussion instrument made of split elderberry stalks, as well as simple six-holed flutes from hollowed out elderberry stalks. Most of the plant, excluding the ripe berries, is mildly toxic, however, and children have reportedly been made nauseated using whistles made from elderberry stalks. The Nuwä word for elderberry is kunuguv, pronounced ku-nu-GUHV.

This was the first year that I have gathered elderberries without my dear friend and collaborator Janice "Haneez" Williams, a Nuwä elder who passed away several months ago. She and I roamed the Tehachapi Mountains for almost 20 years in our annual search for elderberries, and she was with me in spirit. 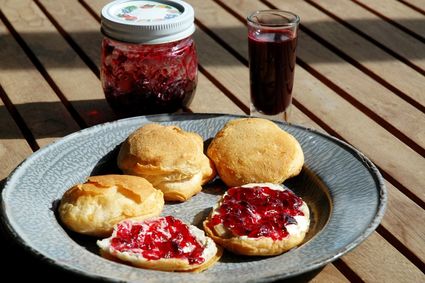 One of the best ways to make elderberry jelly is to use a Finnish steam juicer, which you place on the burner of a kitchen stove. These ingenious devices look a bit like oversized cylindrical coffee makers, like the tall ones you sometimes see at meetings and conferences. The steam juicer is divided into three sections: you put water in the bottom section and washed berries in the top, and the juice appears in the middle section. A piece of plastic tubing leads from a little outlet, and after exposure to the steam from boiling water, the dark red elderberry juice starts running out, ready to be made into jelly, syrup or even wine. Left behind are all the seeds, skins, and small stems – steam juicers are wonderful kitchen tools.

Elderberries are like tiny hidden gems, with a complex flavor that rewards those who brave their tart taste. This elderberry season is ending, but every year brings another crop of these wild berries.