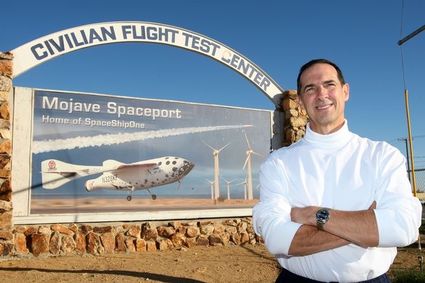 On October 4, 2004, Brian Binnie flew SpaceShipOne for the second Ansari X Prize flight. He soared to a record height of 367,442 feet (112 kilometers/69 miles), exceeding Mach 3 and broke the altitude record set in 1963 by the North American X-15. Binnie became the world's second Commercial Astronaut, as well as the first Scotsman, to reach space.

Binnie flew two "firsts" in SpaceShipOne: the first supersonic flight, and the flight that won the 10 million dollar Ansari X Prize. These flights were the first and last powered flights of SS1. The first powered flight was on the 100th anniversary of powered flight, December 17, 2003. The rocket engine was lit for just 15 seconds and Binnie was propelled to a speed of Mach 1.2 and a height of 67,800 feet.

We have the opportunity to relive these flights from Brian's point of view in his new book, "The Magic and Menace of SpaceShipOne." Binnie recently completed the book about SpaceShipOne, that marvelous program under the helm of Burt Rutan from 2001 to 2004. It is colorful and humorous, with an entirely different perspective from anything previously written.

If you are curious, please check out brianbinnie.net. At that website you will find an outline of the book, a few chapters to read and reviews. The plan is to have it shipped for the 16th anniversary of winning the XPRIZE on the 4th of October 2020.

Binnie was born in West Lafayette, Indiana in 1953. His Scottish father was a professor of Physics at Purdue University. When Binnie was five, the family returned to Scotland and his father taught at Aberdeen University. His formative years were in a country very different from America. When he was a teenager, the family moved back to America and settled in Boston.

He gave one of the most inspiring speeches I have ever heard at a veterans Day Ceremony at Mojave Airport in 2006. He is a true patriot and loves America.

He said, "When this great Nation is called to arms, as the saying goes, we fight to protect our way of life, liberty and the pursuit of happiness. In a word we fight for FREEDOM and Veteran's Day remembers those who have fought."

In Scotland, where Protestants and Catholics are segregated and go to different schools, he was surprised when he started high school in America and everyone attended the same schools. He said, "Nobody cared about that difference."

Binnie said, "I learned that immigrants came here from the world over and were embraced by the bright shining beacon that was the Statue of Liberty and Ellis Island. What made this nation strong and unique in the world was that of all these different cultures were willing to buy into the core belief that all men are created equal and that individualism and a free market would trump over anything any government could manage or direct.

"I believe that this great melting pot is often misrepresented today as our obligation to 'celebrate diversity.' It was or is nothing of the kind. They chose instead to overlook their differences because they had a more important need to satisfy: FREEDOM."

He stated, "But here in Mojave, the irrepressible nature of the American spirit shines brightly. Our agenda may not be as fundamental as life, death and war but we are very much involved in our version of liberty and the pursuit of happiness.

"I can think of few activities as liberating or rewarding as flying. And our more recent extension of this pursuit to rockets, space ships and suborbital flight has put little old Mojave front and center on the global map of pioneers."

Binnie refers to Burt Rutan, founder of Scaled Composites and designer of SS1 as the King of Dreams. "It has been the freedom that Mojave has afforded those that came here to tinker, test, try and fail that has made it so special. Yankee ingenuity, unfettered by rules, regulations and red tape. It's a winning combination every time it's tried."

At an event for the Experimental Aircraft Association, Binnie said, "Nothing could compare to piloting the little spaceship Burt built."

From an early age, always interested in flying, Binnie has a Bachelor of Science in aerospace engineering; Master of Science in fluid mechanics and thermodynamics from Brown University; Master of Science in aeronautical engineering from Princeton University; he served 21 years in the U.S. Navy as a naval aviator, Commander, USN, Ret .; graduate of the U.S. Navy's Test Pilot School (class '93 - June 1987 - May 1988) at Patuxent River. In the Navy, he flew the A-7 Corsair, A-6 Intruder, F/A-19 Hornet and AV-8B Harrier.

Binnie co-piloted the Rotary Rocket Roton in 1999. Flying the Roton was extremely challenging, to say the least, as visibility in the cockpit was so restricted that the pilots nicknamed it the "bat cave." They couldn't see the ground at all and had to rely on a sonar altimeter to guess where the ground was. The entire Roton wanted to spin due to the torque of the spinning rotor blades, so they had to counteract the yaw thrust in the opposite direction and, at the same time, keep it moving down the runway.

First flight was early in the morning on July 28, 1999 with three short hops rising above the runway only eight feet. Second flight on September 16, lasted two minutes and 30 seconds reaching an altitude of 20 feet. More powerful rotor tip thrusters had been installed which made the sustained flight possible.

The third and final flight was on October 12 and the ATV reached a speed of 53 miles per hour, at 75 feet above the ground, and flew almost half way down runway 30. It flew close to one mile at 4,300 feet.

Be sure to order Brian's new book. Bound to be a best seller!