The end of our journey

The story of Dorner Family Vineyard Part 2: It’s all in the details, and, no, wine is not made like you saw in ‘I Love Lucy.’ 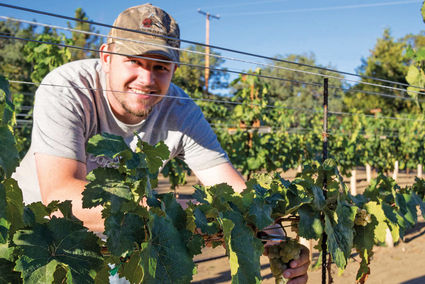 Adam Dorner helps his parents with the grape harvest.

Framing of the Dorner Family tasting room and winery began in January 2017. Semi trucks full of lumber began their weekly delivery to our property. Never one to let work interfere with our traveling, we continued with our plans to travel to Africa in early March for our much-anticipated safari and tour of Egypt. Landing on a narrow dirt airstrip in a tiny 8-seater plane marked the beginning of our time in the Masai Mara. Getting up close with the elephants, giraffes, zebras and lions on our daily drives was a dream come true for me. Combined with our time in Cairo walking amongst the ancient pyramids and cruising the Nile River, I was one happy traveler.

Once we returned from Africa the tasting room framing had really taken shape. We would gaze through the open framed walls, watching our vision unfold before us: this is where the bar is going to be, here is where my gift shop will be, this space is the kitchen, here is where my.... Oops, we forgot to add in an office! Oh, well, we'll just put up another wall here and, voila, I have an office.

As framing neared completion, Mike and I took over the next phase of construction: plumbing and electrical. I began to speak in a whole new language: "construction!" Never in my life did I think I would know what a scissor truss or a Jack stud was, much less a bevel T or a plumb bob. But I learned these terms, and many more, as they became a part of my every day speech. I would routinely make runs to Home Depot for such things as ball valves, pex, three way switches and pvc glue. I shocked myself each time I came home with the correct items.

As the year progressed into fall, it meant that it was grape picking and wine making time. The construction would pause as we shifted our focus to this aspect of our business. It was a battle against nature to preserve our yearly fruit: gophers and ground squirrels attacked our vines from below ground level while the fox and deer attacked the middle and birds and yellow jackets swooped in from above. Something was always trying to get our fruit before we could. Fighting off nature was imperative if we were to have a successful harvest. If this battle wasn't enough for us to question our life choices, it was a very small, yet powerful book that really gave us pause. During one run to a beer and wine making store (I didn't even know there was such a place) I saw a small book perched on the register entitled, A Million Things That Can Go Wrong With Your Wine! What? It was then we realized just what we were in for. As I skimmed the book on our drive home I learned even more new terms that are now commonplace in our everyday conversations. Powdery mildew, spider mites, red leaf and shatter were just a few of the conditions that could affect our vines. VA, stuck fermentation, low pH, high pH, acid dropping out could all affect the outcome of our wines. The tools, too, had names I had never heard of: refractometer, ebulliometer, hydrometer – this sounded more like science class than wine making. And then there were the yeasts, so many yeasts: Bordeaux, Rockpile, RHST. Had we made a horrible mistake? Were we ready for all of this? Oh, well, no time to dwell on that now. It was picking time.

As the grapes began veraison (ripening and changing color), we would test the Brix (sugar content of the grapes) and the pH every few days to gauge when we would need to pick. Sometimes, dependent on the weather, the Brix would jump up a few numbers every couple days, other times they appeared to stick and not want to budge at all. When we got close to the magic number of 23/24 for the Riesling we would prepare to pick. These were very long days, as we rose very early and stayed up very late. While the grapes were still icy cold inside, we picked the little golden gems that clung to the rows of vines. Immediately after picking we quickly sent them through the crusher/de-stemmer which pulled out the stems and sent the juicy little grape remnants into the bin below. From here the Riesling was sent right into the bladder press which extracted every last drop of "grapey goodness." That is the technical term! Next the juice was transferred into the steel tanks to begin the fermentation process. A couple of weeks later it was time to do it all over again with the Zinfandel grapes. Only this time, after crushing and de-stemming, the grape skins and juice were deposited into fermentation bins along with the appropriate yeast, where they would reside for one to two weeks while they fermented and the sugars turned into alcohol. After the fermentation was complete, the grapes were sent through the bladder press and transferred into steel tanks to begin the malolactic fermentation process.

Once the wines-to-be were settled into their tanks we were back at construction. We knew we really wanted to convey, the feeling of being in Tuscany, Italy in our tasting room, and the only way to do this was in the details. We pored over catalogs that featured stone and brick, visited homes that our stucco crew had completed, and searched for the perfect windows and doors. Oh, the doors; what a traumatic year that was. Wrong sizes sent, wrong colors sent, doors discontinued after they were ordered, hinges in the wrong location, more wrong sizes, more wrong textures. Every day was a new adventure/frustration regarding the doors.

Thankfully the windows were quite a bit easier. We found the perfect arched windows for the tasting room but they were white inside. That just wouldn't work, so after installation we broke out the dark brown spray paint and painted them to match the outside. We visited stone yards and assembled the perfect combination of three stone varietals to make what we thought would represent that quintessential Tuscan feel.

Same thing with the tile roof. This was a bit of a challenge. We didn't want it to appear as though we had built a Spanish Hacienda so we were careful to pick more browns and reds than oranges. Each little detail would combine to achieve the desired effect we were hoping to convey.

Another aspect that we felt would give the building that Old World look was that of crumbling stucco, revealing the brick beneath. Prior to our stucco guys coming in we shaved down full bricks and applied them to the exterior walls in small groupings that would look natural once the stucco was brought up to the edges of the brick, like they had been revealed after years of weather. One day, after the stucco was completed, I realized how authentic the brick and stucco appeared when a woman visiting the wedding venue commented, "It's a shame your stucco didn't adhere properly, you can see the brick below". Mission accomplished; that was the stamp of approval we needed.

After dealing with funding issues for the next couple of years, our plan was to open in late March 2020. Construction was complete, we had an adequate supply of 21 varietals of wine, and we had hired an outstanding team to help us out in the tasting room. We were more than ready. We were excited, nervous and relieved to finally be opening – and, just like that, the Covid-19 pandemic hit. We were stopped dead in our tracks. For the next few months we fine-tuned the outside areas of the tasting room. Little did we know the advantage that our outdoor areas would hold for us during the pandemic.

Our opening in June 2020 was more than overwhelming. Even in the midst of the pandemic, we welcomed guests every weekend. The feedback from the community was very positive and encouraging. After a decade of planning and construction, our journey had finally been realized.