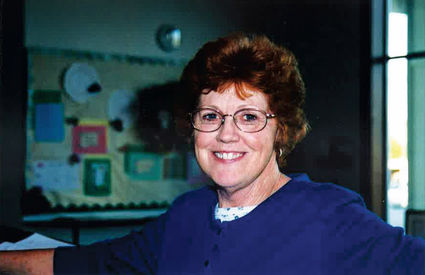 Ellen Virginia Clark Woods passed from this life to be with her Lord and God. She died after a long illness at Kindred Care in West Covina on July 10. Gennye, as she was known by all her friends and family, was a long time resident of Rosamond, Calif. She and her family faithfully attended the Church of God in Rosamond.

She was born to the family of Albert and Mary Davis in Augusta, Ark. on Aug. 21, 1941. She had one deceased brother, Sonny Davis, and two sisters, Sonnie Killingsworth and Juanita Moore (deceased). She attended Rosamond Elementary and Lancaster High School and she married Dorman Delano Clark while still in high school. She went to work for the school district after her graduation. Gennye and Dorman Clark had two sons, Ronald Dorman Clark (Ronnie Clark) and Kelly Clark. Both sons attended grammar and high school in Rosamond. Gennye had three grandchildren, Julie Christine Clark, Ronald Dorman Clark, Jr. and Andrew Dixon McCandless, a stepson of Kelly Clark.

Dorman worked for the cement plant in Mojave until retirement and Gennye worked at Cobb and Cossgrove in Lancaster, Calif. for many years and also the US Post Office at Edwards Air Force Base. Upon retirement Dorman and Gennye moved to Yreka, Calif. where Dorman built their new home. Dorman died from cancer while living in Yreka after 42 years of marriage.

After several years Gennye married Spann Woods, a retired Church of God pastor in Yreka in 2002. They moved to Tehachapi in 2005. Gennye was the pianist and vocalist in family quartets, trios and duets often in the churches she attended. Gennye had two sons and Spann has three sons, Allen, Randy and Craig Woods, so she was a mother and stepmother to five sons and all her sons loved her dearly.

Gennye was an excellent cook. One of the special dishes she prepared was Chocolate Gravy that all of her sons and grandchildren really loved.

While living in Tehachapi, Gennye and Spann lived in Golden Highlands HOA community and attended the Abundant Life Church on Hwy. 202. They often went to the Senior Center for lunch and had many friends there. Gennye was loved by her many neighbors, the seniors at the Senior Center and her many personal friends. She is survived by her husband Spann Woods of Tehachapi, one sister Sonnie Killingsworth of Rosamond and son Kelly Clark of Phoenix, Ariz.

Gennye is resting with the Lord now enjoying the home He has prepared for her.