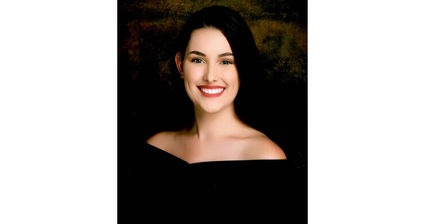 Elizabeth Baca is creative and artistic. She believes matching that with her skills in mathematics and engineering will enable her to pursue a career where she can make a difference.

"When I think up ideas, I can put pen to paper and draw it," she said. "My goal is to take these ideas and use engineering knowledge to develop new real-life cutting-edge technologies and medicines that will advance and benefit mankind. With my degree, I want to help develop new treatments and maybe even a cure for cancer."

Baca, a 2020 graduate of Saugus High School in Santa Clarita, is the winner of NASA's Armstrong Flight Research Center Employee Exchange Council 2020 Joseph A. Walker Memorial Scholarship. The scholarship is available to sons and daughters of NASA Armstrong employees and offers $2,000 per year for up to four years contingent on full-time enrollment and a 3.0 GPA.

"I am extremely excited and grateful to win this scholarship to help me get one step closer to my dream," she said.

Elizabeth Baca is the daughter of John and Christy Baca of Santa Clarita. John Baca is branch chief of the NASA Armstrong Engineering Systems and Technology Division, where he is responsible for overseeing flight instrumentation and systems integration work.

"I was excited when I found out she had won," John Baca said. "She is a great person and always strives to do her best. She had a really tough senior year and it's great for to see these positive things happening for her."

To take her a step toward her goal of curing cancer, Baca plans to study biomedical engineering at The Ohio State University in Columbus, Ohio. The university awarded Baca the Buckeye Scholarship for her outstanding work.

"Biomedical engineering has the potential to help people with their health and daily lives," Baca said. "My dad has shown me that engineering is the key for creating, designing and integrating solutions that turn ideas into reality. I want to apply engineering principles to develop new technologies and let my creative side meet my analytical side."

"Congratulations," Kessler said. "On behalf of the Exchange Council, it's going to be a great experience to watch you go through college for the next four years."

Baca finished high school with a 4.36 (3.96 unweighted) GPA and took a slate of honors classes in biology, math, chemistry, English and anatomy and physiology, as well as advanced placement European history. She was part of the senior honor scholars and the junior honor scholars for having a GPA over 3.75. Baca was a presidential scholar in 2016 for a cumulative 4.0 GPA through junior high school.

Her fine arts awards include the Rising Star Award, best musical solo and third place for musical scene in two competitions. During high school she was in theater, where she was involved in multiple productions of musicals, plays and competitions in her high school and in her community. She worked on Santa Clarita Community Theater productions. Baca also has interest in drawings, painting and digital media and was a center midfielder and part of the defensive line in soccer.

"It was opening night on the first show I had done and I was a dancer," she recalled. "I opened up the show and seeing all the people in the audience and performing for them was amazing to me. I loved making people feel good."

The Exchange Scholarship is named for Walker, who was chief research pilot at the NASA center. He made the first NASA X-15 flight and flew the research aircraft 24 times, achieving the fastest speed and highest altitude. He won a number of top honors in aviation, but he was fatally injured June 8, 1966, in a mid-air collision between an F-104 he was piloting and the XB-70 research aircraft.