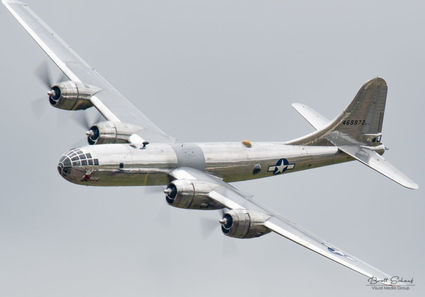 In March 1945, B-29 No. 44-69972 (now known as Doc) was delivered to the U.S. Army Air Corp. About five months later another B-29 was used to drop two atomic bombs on Japan, eventually leading to Japan's surrender and the end of World War II.

In July 1951, Doc was assigned to radar calibration duty along with a few other B-29s. The squadron was known as the Seven Dwarfs and the planes were named after characters in the movie, "Snow White and the Seven Dwarfs." In May 1955, Doc was assigned to target-towing duty and in March a year later, Doc and the rest of its squadron became targets for bomb training at China Lake, Calif.

For 42 years, Doc sat in the Mojave Desert serving as a target for the U.S. Navy. In 1987, Tony Mazzolini found Doc and began plans to remove and eventually restore the B-29 warbird to flying status. It would take another 12 years before Mazzolini and his team would be able to take possession of the airplane from the U.S. Government.

On July 17, 2016, after 16 years of restoration, B-29 Doc roared back to flight. Since then, Doc has traveled to numerous air shows, on display and offering rides, and is now serving out its mission as a flying tribute to the men and women who designed, built, maintained and served in the B-29 Superfortress to protect freedom.

Doc is one of two B-29s that are currently flying in the world, the other B-29 being FIFI. Doc is owned and maintained by Doc's Friends, Inc., a non-profit organization based in Wichita, Kansas.