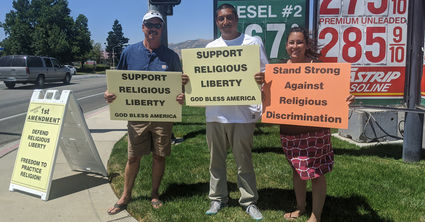 The first of several peaceful protests supporting the First Amendment right to freedom of worship, took place Sunday, July 20, at the intersection of West Valley Blvd. and Tucker Rd.

A small grassroots, loosely organized group of inter-faith protesters assembled on all four corners of the intersection holding signs in support of religious liberty and against religious discrimination.

Terry Jeurgens of Saint Malachy Church said, "Our country and our patriots founded this country," based on the concept of freedom of worship. Many of our country's first settlers were fleeing religious persecution in their countries of origin in Europe.

According to protester John Tyson, religious freedom is being discriminated against by political leaders during the COVID-19 pandemic. Other protesters believe the current limitations placed on worship services are too intrusive, citing for example the prohibition against singing during worship services. A couple of protesters, both members of Abundant Life Church, stated that we need human interaction in our services and voices lifting in singing. Some of the demonstrators also felt that the religious freedoms enshrined in the First Amendment to our Constitution prohibit mandates on social distancing and limits on attendance.

Jeurgens said it is essential "to give honor to our Creator."

Demonstrator Anne Howell added, "Now, more than ever, we need our church doors fully open and our voices heard."

The next protest is scheduled for Aug. 16 in the same location.