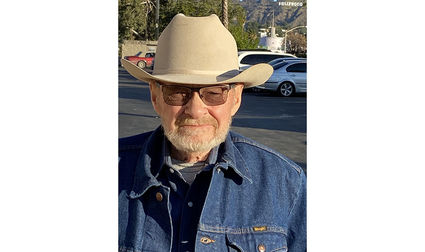 Longtime Tehachapi resident Neal Losey died on April 29, at the age of 77, after a short but valiant battle with cancer. Neal had lived in Tehachapi for almost 50 years and spent most of that time as a cattle rancher.

He was known as a hard worker, an honest person, a purveyor of "bad comedy" (as he called it) and as someone who never missed an opportunity to engage in a long conversation. He was also known for the VOICE, which was classically trained at the New York based American Academy of Dramatic Arts in his earlier days. He used it a lot in the aforementioned long conversations with anyone who would take the time to engage with him. He was very generous and helped a lot of people over time. He believed in keeping his word, honoring handshake deals, treating people fairly and he expected the same in return. He always gave people a chance, and sometimes two. He was a man with a surprisingly soft heart about the things that mattered to him, intertwined with a sometimes challenging and intimidating outward character.

He cared about his family, never missing an opportunity to go on and on about his son, Neal Losey of San Luis Obispo, and daughter, Roxane Losey of Monrovia. He always looked forward to another trip to San Luis Obispo to visit his son, visits from his daughter during Mountain Festival, or their "Tehachapi Christmases" all together that would go on for hours and hours at his home in Stallion Springs. He enjoyed visits with his niece M'lissa Manzella and her family (who graciously cared for him and housed him during his cancer treatment) and from his nephew Tyler Weeks.

He cared about his friends and was very loyal to the people that "got" him. And he cared about his cattle, which were his passion for the last 50 years and which he still got to work with up until the end. A few times, as he got older, he wondered if it was time to quit. But it would always come back to the fact he loved what he did (even if it was fixing a broken fence at 3 a.m.) and had been lucky in his life to find something he truly loved. Up until the day he died, he still talked about getting back to the cattle and "growing the operation." He would have been pleased to see his crop of about 35 good-looking calves this year.

Neal was a unique character. In his ranch truck you could find CDs of operas and Broadway musicals, as well as Bob Wills and Merle Haggard. There was a well-worn copy of Hamlet, his ranch rifle, a cattle prod, the bowl and bed of his ever-present cow dog, all the fence fixing supplies one would ever need and ticket stubs from the performing arts center in Bakersfield. In his briefcase, the latest issue of Western Livestock Journal, and the latest issues of The New Yorker and Time magazine. His cattle ranch was called La Mancha Ranch, after the Broadway musical "Man Of La Mancha," a play in which he had a part in his earlier days and that was based on Don Quixote dreaming an "Impossible Dream" and tilting at windmills which, at times, mirrored his ranching career.

Besides his family, friends, cattle and conversation, he also loved clipping comic strips that were either very sentimental (Red & Rover) or had clever wordplay (Pearls Before Swine). He loved Christmas, reading, New York City, listening to opera, trips to the Farmer's Market in San Luis Obispo (from which he would bring back bags and bags of vegetables for his friends in Tehachapi), old movies and meals at places that reminded him of good times, like Woolgrowers, Rice Bowl, Kelcy's, Madonna Inn and Phillippe's. He still had a love for stage directing, which was something he pursued in his youth. It wasn't actual theater anymore, but you could still find it when he "put on a show," which could mean his work with the Tehachapi Rodeo in the 80s and 90s, coordinating a branding, or putting together his elaborate "Tehachapi Christmas" with his kids.

His children have been very moved by the many fond remembrances they have heard from people who had come in contact with Neal over the years at the bank or the car shop, in a restaurant, at the store, etc. They are gratified to know so many people "got his act." He will be buried with his father and mother, Neal and Virginia Losey and his sister, Kathleen Weeks, in Tehachapi Eastside Cemetery.

There will be a memorial gathering in Tehachapi City Park on Aug. 15 at 11:30 a.m., on what would have been Mountain Festival Saturday, one of his favorite events of the year.