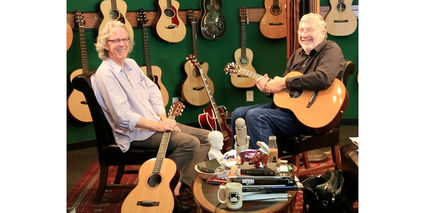 The world is living through a truly challenging time. No aspect of public life is the same as it was just a few months ago. Schools, churches, restaurants, stores of all kinds and, yes, entertainment venues have all been impacted by the current health crisis.

Fiddlers Crossing closed its doors on the night of March 13 after presenting Americana singer-songwriter Grant Maloy Smith to a small but appreciative audience. Other than the venue's Wednesday open mic nights resurfacing on the Zoom platform some months ago, there has been nothing but silence where there were once vibrant concerts and enthusiastic audiences on a regular basis. All the live music has moved safely online for the time being. Artists perform in their living rooms and backyards to unseen audiences out in the ether. Applause has been replaced by "likes" and a stream of comments, heart and thumbs-up icons on Facebook or other platforms. Fans show their appreciation by donation during or after the shows via online payment apps. It's a different world, to be sure, but it certainly beats silence.

After four months of closed doors at the downtown venue, Fiddlers Crossing will present its first Facebook Live concert on Saturday, July 25, at 4 p.m., featuring the "High Octane Americana" duo of Glenn Houston and Stevie Coyle, aka: The Quitters. The concert will originate from Glenn Houston's backyard and will use the common donation model. The show is free for anyone to enjoy, but the venue strongly urges viewers to contribute generously to the performers using the links that will be provided during and after the show. Touring performers, obviously, can't make a living playing in-person concerts for the time being. They must rely on online shows, lessons and sales of merchandise to stay afloat.

This online concert will mark the second time The Quitters have played for the Fiddlers Crossing audience, the first being back in June of 2018. The enthusiastic audience reaction to that show made a return of the duo a certainty.

Houston and Coyle call themselves The Quitters because they both quit bands that were popular on the festival circuit and in venues around the country. Both were founding members of The Waybacks, a San Francisco-based Americana band formed in 1998. Coyle played rhythm guitar and sang with the band until 2007. Houston was the lead guitarist through 1999.

Houston joined with Travis Jones in 2000 to perform as Houston and Jones. What started as a duo soon became one of the most popular West Coast Americana bands when they added drums, keyboard and bass to their lineup. They twice played Mama Hillybean's here in Tehachapi, in 2007 and 2009. In 2015, Houston and Travis Jones played Fiddlers Crossing as the original duo.

Houston has been voted Best Guitarist by the Northern California Bluegrass Society and has won a Bay Area Music Award as a founding member of Hearts on Fire. He has shared the stage with the likes of Emmy-Lou Harris, Merle Haggard, The David Grisman Quintet, The Nitty Gritty Dirt Band, Bela Fleck, Earl Scruggs, Doc Watson, Willie Nelson and Waylon Jennings, to name a few. Originally from New Jersey, his influences range from Albert King and Michael Bloomfield to Doc Watson and James Burton.

Coyle grew up in Southern California surrounded by music. His father owned a Spanish-language radio station and brought home the records that didn't fit the format. At a tender age he was listening to everything from The Ventures to "Alvin and the Chipmunks Play the Beatles Hits." His grandmother was a pianist in the heyday of vaudeville and his mother played in mandolin orchestras in the 1920s. It also didn't hurt that David Lindley (lead guitarist for Jackson Browne in the 1970s) played in a bluegrass band that rehearsed next door and gave Stevie his first lessons. He has also worked with musical satirist Roy Zimmerman in the Folk tribute parody band, The Foremen, and has been in other groups, as well as on TV.

It's often said that "every ending is a new beginning." While their quitting other bands signaled the end of a musical era, the pairing of Houston and Coyle is the beginning of a new and exciting one for them and, certainly, for online audiences. The Quitters will join us via Facebook on Saturday, July 25 at 4 p.m. and with this concert, the silence from Fiddlers Crossing will be broken.

For more information and to hear samples of The Quitters, go to http://www.quittersduo.com or http://www.fiddlerscrossing.com. To access the concert, simply friend Fiddlers Crossing on Facebook.