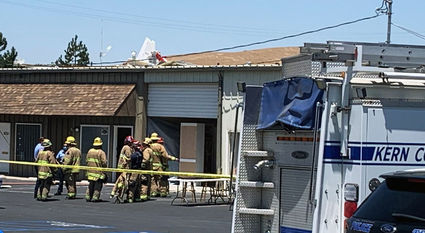 At approximately 11:53 am Kern County Fire Department emergency personnel responded to reports of a plane crashed into a building outside of the Tehachapi Municipal Airport. Upon arrival firefighters found a single engine airplane crashed into a building and leaking fuel. Tehachapi Police Department coordinated safely evacuating the vicinity while firefighters began assessing the stability of the aircraft, which was still hanging from the ceiling of the building. Firefighters made access to the cockpit and were able to verify one fatality, the pilot of the aircraft. Once representatives from the FAA arrived members of the Kern County Fire Department Hazardous Materials team along with both USAR teams coordinated the technical undertaking of stabilizing the aircraft and recovering the pilot for the Sheriff's Coroner's Office. Once the pilot was carefully recovered the scene was left in care of Tehachapi Police Department, Tehachapi Building Department, and Kern County Environmental Health for operations related to the removal of the

aircraft. There were no injuries reported by civilians or firefighters related to the crash or recovery operations.