Ephedra: The first tea of Tehachapi 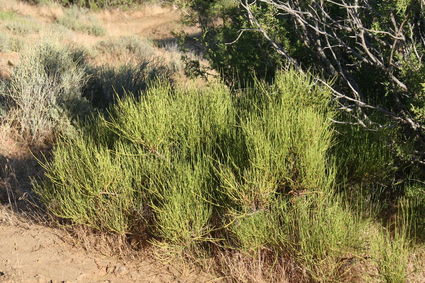 Ephedra is a type of evergreen shrub that grows in arid places, often in sandy soil.

A small dark green shrub flourishes in the Tehachapi Mountains, growing among California Junipers in drier locations. You may be familiar with this plant in connection with cold medication and diet pills, but Tehachapi Indian people have used it to make tea for many hundreds of years.

This is a plant with a hundred different names: Indian tea, Mormon tea, sheepherders tea, Spanish tea, cowboy tea and many others. The local Nuwä (Kawaiisu or Paiute) people call it "Tu-tu-pivi" while botanists refer to it as Ephedra, with the most common species in this area being Ephedra viridis or "Green Ephedra."

This handsome little shrub can be found in places like Sand Canyon, the back road to Keene and other areas. Once you know what it looks like, it's easy to spot – it has a distinctive dark olive green color and reed-like segmented stems that almost look like green pine needles.

With all of Ephedra's assorted names, it's apparent that many different kinds of people have made tea from this plant. It has been used as a remedy to treat colds, asthma, coughs, chills and other ailments, but it has also been drunk for centuries as simply a stimulating tea. Members of the Latter Day Saints church have used it as a replacement for coffee and tea because it contains no caffeine, which church members avoid.

Ephedra contains an alkaloid called ephedrine which is similar in structure to adrenaline. Ephedrine and its synthesized version pseudoephedrine are common ingredients in over-the-counter cold medicine and allergy medications. Because it tends to increase metabolism and suppress appetites, ephedrine has been used in diet pills. About 15 or 20 years ago, ephedra got a lot of negative publicity because several deaths involved the over-usage and abuse of ephedrine, including a professional football player who took massive doses in an attempt to lose 30 pounds in two weeks.

As a result, Ephedra got a bad reputation and its usage was curtailed, which was unfair considering it has been safely used for thousands of years by many cultures, including the Chinese. Unlike Eurasian Ephadras, the shrubs native to California and the Tehachapi Mountains do not contain significant amounts of ephedrine.

Our local Ephedra has a mild and nutty fresh flavor, and is not bitter – most people don't use honey or sugar with this Tehachapi tea. Because it grows abundantly in local areas, I'll pick several handfuls of the tall green needles. If you do this in moderation, it does not harm the plant and can serve as a pruning. I wash them off, remove the green twigs from the woody stems, and then pour boiling water over them and let them steep for about 20 minutes, and voila! A delicious cup of tea. You can serve it hot for one of Tehachapi's cold winter nights or over ice for our warm summer days.

The segmented stems of Ephedra have been used for thousands of years to make tea.

So if you're hiking or driving in the more arid parts of our area, look for the compact clumps of Ephedra, which are typically two to four feet tall, with clusters of green stems that range from about two to 10 inches long. Gather some up and make yourself some tasty tea. It's an evergreen plant so the stems are always available, but look for the brightest green ones. As you drink your tea, you'll be sharing a beverage that has been heated over the campfires of Indians, Spaniards, miners, shepherds, explorers and others in the American West for centuries. . .