Treasure, trees and swamps ... oh my! 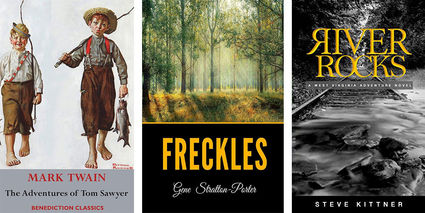 Who can forget Tom and Huck, Sid, Aunt Polly and of course pretty Becky Thatcher? They are found in the lazy crazy summer days in fictional St. Petersburg, Missouri, created by a man whose name came from vessels going up and down the great Mississippi. “Mark Twain!” they would call out. Samuel Longhorne Clemmons penned the name Mark Twain and wrote of the greatest adventures of summertime. Stories of Tom and Huck that have lived on since 1876. Scraps and jokes and tricks, lots of fishing, scary bad guys, mysteries found and solved. A girl loved and lost. What could be better except maybe finding more stories like “The Adventures of Tom Sawyer” and “The Adventures of Huckleberry Finn?” There were other writers who longed to describe the beauty of their lands and adventures in their summer hills, valleys and swamplands.

Gene (Geneva) Stratton-Porter was a writer, nature photographer and naturalist, born in 1863, Indiana. Only formally schooled through 11 years of age, she chose to learn about nature and the world on her own. She wrote a series of novels ... now considered classics, my favorite being “Freckles.”

Freckles himself was a red haired, one handed scrappy kind of guy whose greatest desire in life was to be accepted and loved. Through pure grit, good manners and voice of beguiling Irish cadence, he asks for the most dangerous and difficult of jobs at a lumber mill. To be the walkman, guarding the greatly desired and valuable trees, found within very wild and untamed land. He promises he can walk the seven miles of line twice a day and keep the lines repaired and the thieves out. And when his first day on the job didn’t kill him, Freckles grew stronger and surer each day after.

He also learned a great deal about the natural world thriving around him, the wildlife, birds, insects, snakes and fell in love with both the forests and swamplands in his care. Meeting the Bird Lady helped him learn about vultures he called “me chickens.” And one day an angel of a girl walked into his forest and straight into his heart. But what would this girl of beauty, good breeding and wealth ever see in him? Remember this was over a century ago and families mattered. He was an orphan. He had only one hand, a flame of red hair and a face covered in freckles. What magic happened that summer? Did the forest stand? Were thieves lurking behind the majestic trees? Did he capture an angel’s heart? A good summer read indeed. Grab a comfy hammock and iced tea!

But if you need a treasure map and a tease of stolen gold, added to forests of thieves, swamps of danger and roaring rivers full of intrigue, try out the newest homage to Tom and Huck. In “River Rocks: A West Virginia Adventure Novel” by Steve Kittner, you follow two 14-year-old boys. The saga begins with a train robbery in 1904, then jumps to the era of new cell phones and fast growing internet, where the finding of a cipher map written on deerskin and hidden in a red metal milk can for over 150 years is still the most exciting thing that ever happened to them.

As with Tom and Huck, some adults are helpful and others become competitors in finding treasure, lost Confederate gold bars. The gold belongs to the government but there is a reward! Who will figure out the cipher first? Will the raft floated by milk jugs really be seaworthy? Is Burl Otis a mean mountain man or an ally? So many questions to answer on a lazy summer day.

We may not be able to take that vacation we planned this year, fish in our favorite lake, scream through hair raising rides in amusement parks, visit grandma for good food. But we can adventure none-the-less, with Tom and Huck, Freckles and an angel, Edie and Josh and Burl Otis. We can ride the rapids and dig for gold, enjoy nature through the eyes of people who experienced it before it disappeared. Because kids just don’t get to ride real river rapids or find treasure maps or make friends of a lifetime any more. Or do they? Read some of these stories then look around. We have a great town surrounded by lots of nature. You never know what you might find when you look out there, at any age, being young or young at heart.