An interesting program was on the History Channel back in 2004 and it involved Mojave Airport's CV-990 Gate Guard. The big jet parked at the Highway 58 entrance to Mojave Air & Spaceport has an impressive history related to the Space Shuttle.

When first introduced in 1962, the CV-990 Coronado was billed as the world's fastest subsonic airliner.

I remember being there to see the last flight of the Convair 990 (CV-990) aircraft from Edwards, formerly used by NASA as a medium-altitude research platform and Landing Systems Research Aircraft (LSRA), which ended at Mojave Airport on Oct. 24, 1996.

A NASA F/A-18 flew chase with the 990 and Dryden Research Pilot, Ed Schneider, did a fly-by with the Hornet after the 990 landed.

In the cockpit of the 990 were Dryden Project Pilot, C. Gordon Fullerton and Dryden Chief of Flight Operations, Tom McMurtry. Also on board were Daryl Townsend, crew chief and flight engineer and Steve Robinson, flight engineer. Herb Anderson, operation engineer, was on hand to answer questions and drive the crew back to Edwards.

"There were only 36 990s built," said Anderson. "The first one used for commercial passenger service was with American Airlines, and the last one was flying for an airline in Spain." The Convair Division of General Dynamics Corp. in Fort Worth, Texas built the CV-990 in 1962.

Former General Manager of Mojave Airport, Dan Sabovich, was there to meet his friends, Fullerton and McMurtry and said, "This airplane will stay here at Mojave Airport from now on."

Mojave Airport's CV-990 was used to test space shuttle landing gear and braking systems and the tests were conducted at Edwards AFB and Kennedy Space Center in 1993 and 1994.

The tire wear tests were significant to the shuttle program because it allowed the shuttle to land with increased crosswind limits from 15 to 20 knots. The shuttle landing gear retraction system was installed in the lower fuselage area of the CV-990, between the aircraft's main landing gear.

During the tests, the additional landing gear unit was lowered by a high-pressure hydraulic system after the CV-990 main landing gear had contacted the runway.

The tests allowed the engineers to assess and document the performance of the space shuttle's main and nose landing gear systems, tires and wheel assemblies, plus braking and nose wheel steering performance. 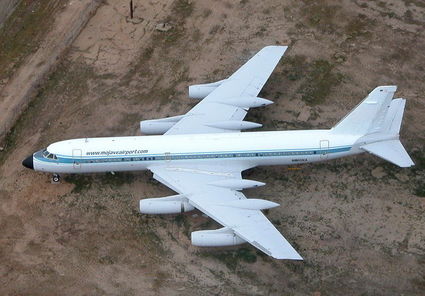 "We landed this aircraft during one of the tests at 240-knots," said Project Pilot Fullerton. "That's really smokin'!" Fullerton is a veteran of two space shuttle missions and he was also a member of the NASA flight crew that carried out the space shuttle approach and landing tests at Dryden in 1977 with the prototype orbiter, Enterprise.

Co-pilot Tom McMurtry was a Mojave Airport tenant. He kept his Piper J-3 Cub and UPF-7 Waco biplane at Mojave. "Flying the 990 on her last flight was really fun," said McMurtry. "She served us well."

Fullerton and McMurtry have both passed away and we miss them terribly. We lost Fullerton on Aug. 21, 2013 and McMurtry on Jan. 3, 2015. Dan Sabovich passed away Feb. 17, 2005. He was the visionary who started Mojave Airport, which is now known as Mojave Air & Spaceport.

We have lost so many of our aviation friends over the years, but we cherish our memories of them. Getting older isn't as "golden" as we were told it was going to be!