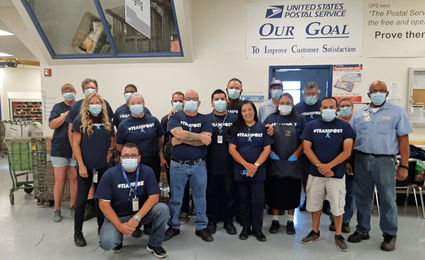 In July of 2017, Todd Post and three other families in his extended family moved to Bear Valley Springs (BVS) from different parts of the country. Post and his wife moved from Connecticut, one of his wife's sisters moved from Thousand Oaks as did their nephew, and the second sister moved from Bakersfield. The families had always been close and decided they would all prefer to live close together rather than be spread out all over the country. Post had spent 21 years in the Navy moving his family to many different locations and had worked several more years on a commercial tugboat on the East Coast. Quite serendipitously, seven days after closing escrow on their home in BVS, a position at the Tehachapi Post Office opened and Post has happily worked there ever since.

Around Thanksgiving of 2019, Post, who had been suffering from increasing back pain, decided to get a medical diagnosis and was given the worst possible news. His back pain was a symptom of Stage 4 prostate cancer. The cancer had spread from his prostate into his back and lungs. He embarked upon four rounds of chemotherapy at City of Hope in Lancaster, Calif. His doctor stated that since Post is only 55 years old, they would be able to use the "big gun chemo ammo" on him which would not have been possible had he been older. Amazingly, Post lost only two days of work during rounds one and two of the chemotherapy, one day during round three and none during round four. His rationale was that it was better to strive for normalcy than to stay at home. His last dose of chemotherapy occurred on April 24 and in early June his doctor confirmed that he is in remission.

It was Tehachapi Postmaster Jorge Vaguera, who decided to celebrate the good news of Post's return to health by designing and ordering special T-shirts commemorating the last day of chemotherapy and surprising Post on June 18 with a special day in his honor with all postal employees wearing the special shirts saying #TEAMPOST with the date April 24, 2020 printed in the "O." Post said that he didn't realize the shirts were to honor him until he saw the printed date.

Post credits his current recovery not only to his excellent medical care but also to the wonderful nurturing family atmosphere at the Tehachapi Post Office. He remarks that they are one big caring family. Vaguera, who has worked at 11 other postal facilities, verifies that the personnel at the Tehachapi Post Office are quite extraordinary in their care and affection for one another. We all know Tehachapi is a unique and marvelous place but this is one more heartwarming example of mountain love and caring.