'A decade in the making'

The story of Dorner Family Vineyard Part 1: Our inspiration, journey and the unexpected delays along the way 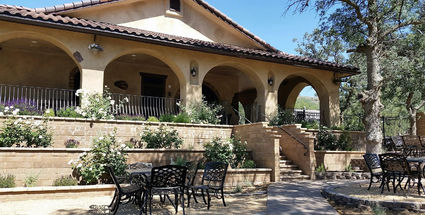 As the Grand opening of our Tasting Room and Winery quickly approaches, Mike and I reflect back on the 10-year journey that brought us to this very spot in our lives. Prior to 2009, nothing would have indicated the path that we would take this past decade, the skills that we would acquire along the way, or the friends that we would make throughout the sometimes exhausting, always interesting, but never boring process.

In the summer of 2009, after planning and saving for five years, we set off on a 13-week trip to explore Europe. My parents were both avid travelers and I most definitely inherited the "traveling gene." Our first month was spent in the U.K., Scotland and France, exploring small villages and the quintessential tourist locations.

After France we spent a few days in the lovely small village of Bielstein, located on the banks of the Mosel River in Germany. Grape vines flourished on the steep hills that rose up from the Mosel. Small “trains” ran between the rows, carrying the vineyard workers and their precious cargo up and down the near vertical hillsides. It was here, during an impromptu personal tour of a small local winery, that Mike was introduced to the semi-sweet German-style Riesling wines. Up to this point in our lives the only wine Mike occasionally drank was White Zinfandel, thanks to my parents who always had a large bottle of Beringer White Zin in the fridge. As far as we knew...White Zin was pretty much the only wine in existence. Happily, we were both wrong on this count. We fell in love with this delightful new wine.

After Germany we ventured through Switzerland and Austria and ended our trip with four weeks in Italy. During our one week stay in Tuscany, we fell in love with the architecture and general feel of the ancient hilltop villages that spotted this particular part of the Italian countryside. We spent our days exploring these magnificent old villages, wandering up and down the worn cobblestone streets, taking in every moment of this extraordinarily beautiful country. The dark wood, stone, brick and warm tones of the structures inspired us. Upon returning from our trip I remodeled our kitchen to reflect our love of Tuscany.

Once we returned home to Tehachapi we decided to plant a small “hobby” vineyard of Riesling and Zinfandel grapes on our home’s 20-acre parcel in Cummings Valley. We started preparing the vineyard site in 2010 and in spring 2011 we planted our first 100 vines. During this time we met Bob and Patty Souza, owners of Souza Family Vineyard: the very first vineyard and tasting room to be built in Tehachapi. From the moment we met Bob and Patty, they were welcoming and encouraging of our plans. They freely shared their experiences and expertise with us. I would never step foot in their tasting room without my trusty little notebook to jot down the little “pearls of wisdom” that Bob and Patty would share with us.

Bob once told me, “You will make your own mistakes, but they don’t have to be the same mistakes that we made.” Throughout 2011 we tossed around the idea of building our own small wine tasting room. “How hard could it be,” we thought to ourselves. Famous last words.

We knew that we would need to plant more vines if we were to be a successful, albeit small boutique winery. In spring 2012, we planted 400 more Riesling and Zinfandel vines. Once the vines were planted we began the process of designing our tasting room and winery. During the sometimes frustrating CUP process, we applied for and were granted a Conditional Use Permit, by the Kern County Planning Dept. to alter the use of our land from agricultural to commercial.

Our first set of plans, that Mike designed and drew himself, were turned into the building department on Dec. 30, 2013, just under the wire before radical changes in the building code were to take effect just two days later. We received the go -ahead to start building in August 2014, just a few months after we opened as a wedding venue location. During the beginning stages of construction many mistakes were found in the plans. This necessitated us hiring a second engineer to correct the plans. This was another long drawn-out process as the new engineer went over the plans with a fine tooth comb, finding several more errors. During 2014 and 2015 our wedding venue continued to grow in popularity. I loved working with our brides and building our vendor team. We were hosting weddings every weekend May through October. 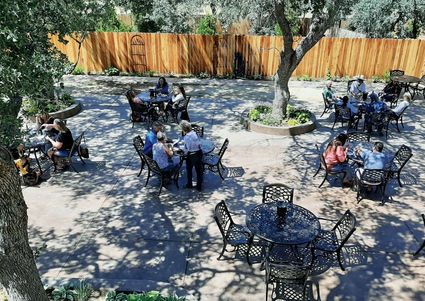 Friday, June 12 was the opening day for Dorner Family Vineyard. Keeping social distances, guests enjoyed an afternoon of wine and snacks while listening to music provided by David Reeves Carpenter. Michele Dorner personally created a selection of salads, sandwiches and charcuterie trays for the event.

In early 2016, once the corrected plans were resubmitted and once again approved by the Planning Dept., we began excavation of the tasting room site. If anyone is not familiar with our setting in Cummings Valley, it is the location of an ancient riverbed. The boulders we were encountering were consistently the size of couches and small vehicles. No little tiny rocks for us! We removed over one million pounds of boulders from the building site. It was a slow and arduous task as we over-excavated the building site down nearly 5 feet. During the winter of 2016/17 we lovingly referred to this mud pit as Dorner Lake.

While we dealt with funding issues, Mike and I continued to work on the underground infrastructure for the tasting room and winery building, completing much of it ourselves. Our friend, Ron Depew, whom we met at Souza Family Vineyard, intervened on our behalf and was able to secure funding for us from Valley Republic Bank. We will forever be grateful for his intervention. With our construction loan in place we were ready to continue on with construction. Framing began in January 2017. Our long-standing dream of a Tuscan-Inspired tasting room was coming to fruition.