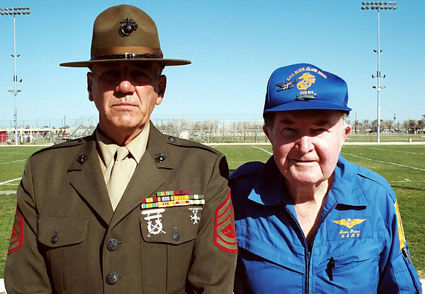 During the past few days, I have been going through some of my old emails and aviation articles that I wrote almost 20 years ago. I ran across an interesting email exchange with a Marine veteran who was stationed here at Marine Corps Air Station Mojave during World War II. I'm so glad I printed them out. It was really fun to read them again and stir the memories.

Some of you may have known Tehachapi resident Col. Bruce Porter, USMC (ret.), author of "Ace, A Marine Night-Fighter Pilot in World War II." He flew in Squadron VMF-452 at Mojave during the war.

Bruce came to speak at the Bakersfield Navy League meeting in June 2002. After that we became good friends and via email, he introduced me to some of his friends who had served with him at Mojave.

He was proud of a photo taken of him with Lee Ermey, USMC Drill Instructor who appeared in the movie, "Full Metal Jacket."

When Bruce found out how much I liked aviation history, he contacted his fellow Marine Corps pilot friend, Charles (Pat) Weiland in Beaufort, South Carolina and asked him to send me a copy of the book he wrote called, "Above & Beyond." In the book, Pat tells about receiving those cherished Gold Wings and flying the Chance Vought F4U Corsair. He signed the book, "From one ol' aviation enthusiast to another!"

Part III of the book is titled, "The Desert" and tells about the scene at Marine Corps Air Station Mojave in 1944 when squadrons VMF-451 and VMF 452 were first organized. Pat is part of the history of the very beginnings of our Mojave Air & Spaceport. It was always enjoyable for me to email him about the latest happenings at the airport and he would email back with stories of yesterday.

Another Mojave Marine was John Cox. He didn't mention his rank while serving at Mojave, but did tell a great story. Here's the email from August 2002: "Quite a surprise to be hearing from someone living in Mojave. My first visit was in early 1944 being assigned to Marine fighter squadron VMF-452. Pat Weiland was my Commanding Officer.

This squadron trained for one year at Mojave. I remember one particular flight was a high altitude gunnery mission. Pat was leading the flight when the plane towing the target lost it. Pat said every man for himself and return to the base.

There was a cement plant just west of Mojave and I decided that now was the time to give it a buzz. As I was pulling up from the run I caught sight of an airplane flying on my wing. It was Pat. I immediately flew back to the base and waited for the repercussions.

I was summoned into his office and after he closed the door he said, 'Why didn't you go back for another pass?' Enough said.

We had a lot of fun training, but it was serious getting us ready for our main mission. Finally the Marine Corps assigned the squadron to Navy Air Group 5 which was assigned to the USS Franklin (CV-13 (Big Ben).

Our 452 pilots had an average of 350 hours in the Corsair, but landing aboard an aircraft carrier was an unexpected experience!

Was nice to hear from you and expect to be in contact."

In one email, Pat Weiland said, "The books that I have written have prolonged the enjoyment of my life immensely."

Pat advised a young pilot to write about his memories of flying in the military. He said, "If you don't do it, then the events, of which you are now so familiar, will be lost forever. These recordings will have their ramifications when considering family and friends. And who knows, a few descendants down the line might even remember you! (Lord, forbid.) Just don't lose it. Record it." 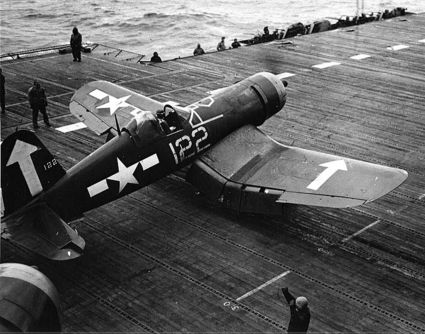 Corsair on deck of carrier.

I believe that is great advice for everyone. Even if it doesn't involve flying, write down your family memories to be passed on to your children and grandchildren. Reading the words written by people who loved you keeps them alive forever. I certainly cherish the cards and notes from my son who passed away last year.

I received sad news in April 2004 from Pat Weiland's son. After a lengthy illness Pat died peacefully with his son and wife holding his hand. One more of our "Greatest Generation" was gone. He was 86. I am so glad he took the time to write about his experiences, so we can read them over and over. I feel privileged to have had the opportunity to call him "friend."