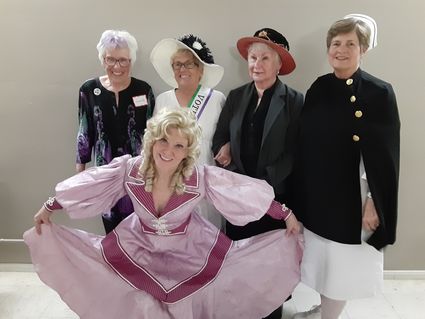 March marked the 36th year since American Association of University Women Tehachapi Mountain Branch was established. It began in 1980 through the efforts of Marti Sprinkle and the late Evelyn Seaman. It functioned as a satellite of the Bakersfield branch, with meetings held in Tehachapi. The group received its charter in March 1984 becoming the 93rd AAUW branch in California.

March is also Women's History Month, so the birthday meeting featured four members who portrayed historic women. They were part of a group called AAUW Storytellers.

Laura Amstead portrayed by Maude Younger, an American suffragist, feminist and labor activist. She came from a wealthy family, but with a social conscience that led her to advocate for women workers. She was a lobbyist and a union organizer, and devoted herself to working for voting rights for women.

Gertrude Jekyll, portrayed by Joanne Beckett, was a British horticulturist, garden designer, writer and artist. She designed over 400 gardens in the United Kingdom and the United States. Although she died in 1932, books and articles she wrote are still available and referred to by gardeners.

Mary Pickford, portrayed by Andrea Hicks, was a Canadian born American who became a silent movie actress. When moving pictures replaced the silent films, it was a difficult transition for her. However, she went on to successfully act, write and produce moving pictures.

Connie Brehm, was Captain Edwina Todd, a Navy nurse who described her harrowing experiences in the Philippines during World War II. She was held as a prisoner of war under harsh conditions, but nursed the civilians who were also imprisoned. As the war drew to an end, she and the other prisoners were rescued when parachutists arrived and hustled them into trucks that whisked them away before the Japanese could stop them. When she recovered from the ordeal, she continued as a Navy nurse until she retired.

AAUW promotes education for women and girls. Membership is open to both men and women with a 2-year or higher degree. Call (661) 972-6508 for more information.