Shades of the past 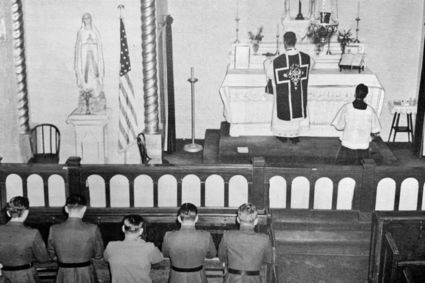 St. Mary's of the desert was a place of worship for U.S. Marines stationed at the USMC Air Station in Mojave during WWII.

I have been reading about panic buying at the stores. Due to my vintage age I have been requested by my Senior Citizen children to stay away from all social or business contact. I do plan to drive to the Post Office today; my adventure for the day. There is plenty to do at home so I stay busy.

This recent panic buying, or hoarding, if you will, reminds me of the days of World War II when items on the grocery shelves were limited. We used to jokingly say, "We'd better buy up all the sugar to keep the hoarders from getting it!" It was just a joke for sugar was a rationed item and you needed a coupon from your ration book to even buy sugar. Many items were rationed and when one shopped you did not show up without your ration books. Sugar, coffee, meat (hard to get bacon), canned tuna, Spam, shoes, nylon stockings, gasoline, tires and dozens of other items. We didn't mind as there was always enough food available; even with rationing. Feeding and supplying our Troops here and abroad was paramount. We did not mind as we did not do without but did not stockpile items; it wasn't patriotic. There was a war going on and military here and overseas had to be considered. Some of the troops got tired of Spam, but SOS at the various Mess Halls throughout the world seemed to be acceptable although they had their own military name for it.

I was only 13 when the war began in December 1941 and 17 when it ended in August 1945. Scrap metal drives, paper drives and bond sales kept the citizens busy. New cars were a thing of the past and people rode bicycles or walked to preserve the few gallons of gas they could buy with their coupons. It was a common sight to see local physician, Dr. Madge Schlotthauer, in the mornings, peddling to the Tehachapi hospital to make morning rounds. Sometimes she would meet Father Mangan from the Catholic Church, also on his bike, going to the hospital to see a sick parishioner.

In July of 1942 the small town of Mojave was chosen as the site of a Marine Corps Air Station. The floor of the great Mojave Desert made a perfect training area for the Marine Corps fighter planes that were to be used in the Pacific War Front. Minter Field in Bakersfield became an air base for the Army Air Corps.

In 1942, my father worked in Bakersfield and we lived there for two years before being able to move back to Tehachapi to join my friends for my junior and senior years at Tehachapi High. While a student in Bakersfield, there was a shortage of workers to help harvest the crops of the San Joaquin Valley. Jobs were plentiful and better paying positions were taken leaving the agriculture harvest workers in short supply. The high schools in Bakersfield let school out for three days to help with the cotton crop harvesting.

My "cotton pickin'" job came with a salary of a cent and one half per pound. My! My! Cotton is very light. I picked 15 pounds the first day, 25 the next day and 40 on the third day! There were some pickers that did it regularly that could weigh in at 150 pounds. Some picked 300 pounds! They were professionals. Those three days ended my career as a cotton picker, but I did earn about $1.25 which bought me a ticket to the movies twice. Admission for high schoolers was 60 cents then. We managed to harvest that cotton crop though and felt good about it.

That war ended and Tehachapi lost 15 of its citizens who were in the military: 14 men and one woman. My two brothers arrived home safely: one from the European Theater of War and the other from the Pacific War areas. The little town of Tehachapi welcomed home those who had served and kept in their hearts those who would not return.

At present we find ourselves facing a world crisis; one so large that we cannot even foresee the outcome. With prayer and sticking together, as citizens of our country always do when it looks darkest, we'll make it.