The case of the missing earring

When my daughter Teagan was born, her father gave me a pair of 1-carat diamond earrings to commemorate her birth. They are the most meaningful pieces of jewelry I have because they represent Teagan to me, and all the wonderful things she's brought to my life. Her father and I are no longer married but those are my "Teagan earrings" and I wear them all the time. Recently I was cleaning out the rental unit where we had been living after most of our things had already been moved into the new house. I had been using a vacuum and then happened to notice that one of my earrings was missing! I knew that it had just gotten lost within minutes because my ear still had the little red circular indentation where the earring had been. We looked EVERYWHERE for it – I opened the vacuum and sifted like an archeologist through every bit of dirt it had picked up, but no earring. We searched and searched but the earring was gone. 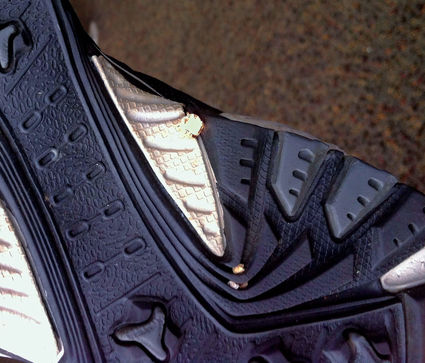 Earring wedged in the tread of Kris Thurman's shoe.

About a week later I took Teagan to LAX so she could fly to Florida to spend some time with her father. We were sitting and waiting, typical airport behavior, while a woman near us ate a bunch of McDonald's food from a "to-go" bag. We glanced at each other a few times without anybody speaking and then after awhile she nonchalantly said "You gotta diamond on your foot." Teagan and I thought she might be slightly kooky, like some random person you might encounter at LAX, and I looked at her a little puzzled and said "What?" And she gestured towards my foot and said "You gotta earring in your shoe." And I looked down and saw my missing earring wedged in the tread of my shoe! I was ecstatic! I had been wearing the same pair of shoes around town for a week, and somehow the earring hadn't fallen out. I was so delighted and gushing that I'm sure that woman quickly wished that I would just move away and go back to leaving her in peace. And after all that, the earring itself wasn't damaged, marked up or bent in any way – it was just missing the threaded back, which I have replaced. It was definitely a happy and unlikely ending to the case of the missing earring.