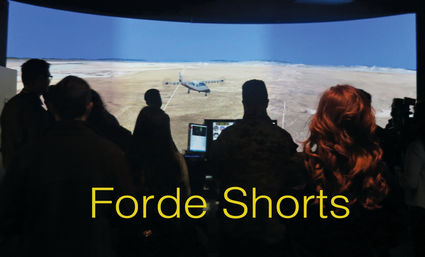 Stolen hearts - Alex Mullenax's sidekick captured hearts at the March 4 Greater Tehachapi Economic Development Council (GTEDC) meeting at the Slice of Life Enrichment School. The soft, curious, friendly critter was a week-and-a-half old miniature breed of dairy goat called a Nigerian Dwarf. It had been rejected by its mother as defective and Alex is raising it by hand. She is taking suggestions for names. Edwards envoy - Edwards Air Force Base Installation Director Dr. David Smith, featured presenter at the GTEDC meeting, described the F-22 as a "state of the art fighter" and "awesome." With the F-22, "the government bought a Ferrari. It's the fastest, meanest, sexiest looking" warfighter. With the F-35, "the newest kid on the block... the government bought a Corrola. It's dependable, middle of the road, with economic features." In war exercises conducted by top programs in the Air Force and Navy, he said, four F-22s killed all 16 of the enemy. "The enemy never saw them. They were invisible." Edwards' mission is to flight test the nation's combat warfighters. One job is to keep B-52 bombers updated and flying. "They are not building any more" he said. " There are 90 existing B-52s; 72 are flyable." The B-52 program began 70 years ago. Smith's message to Tehachapi was one of outreach and community partnership. "We need to be an integral part of this community," he said. Nine hundred Edwards personnel live off base, and they need safe, affordable housing, which is available in Tehachapi. The base sponsors the Starbase program, in which 5th grade students take STEM classes on base one day a week for five weeks in a row. A parent in the audience said the program is outstanding. Smith said the base offers contracts to local businesses. In a business pitch event, he said, "We ink the deal now. We write a check on the spot for 15 percent of the contract so you have funds to proceed."

Pay to play - The Tehachapi Valley Recreation and Park District (TVRPD) is installing a robotic payment arm at Brite Lake. District Manager Corey Torres said the device will control access and ease the impact on roads and restrooms, as vehicles drive in without paying when the gate kiosk is unattended. The increased income will help pay for fencing and other improvements. Torres said the pool, Dyer Natatorium, will be open March 30. The annual fishing derby is April 18.