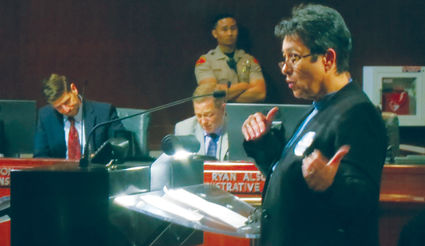 Lydia Chaney, owner of South Street Digital and president of the Greater Tehachapi Economic Development Council, said to the governor's representatives: "Please explain to me and my fellow citizens why he wants to send business to countries that have no environmental rules and regulations... countries where they don't believe in human rights, where being of the LGBTQ community warrants your death...where women are treated as second class citizens, if not less...There is no reason for our resources to be taken away. We supply such a large portion of oil to the state now and we do it right."

The full impact and force of the California government's climate change directives burst forth on Jan. 14 at the Kern County Supervisors meeting, as hundreds of people overflowed the chamber to protest new state initiatives that are key ingredients in the long march toward shutting down of the oil industry.

The initiatives, which include a moratorium on various drilling permits, have hit Kern County hard, creating a climate of uncertainty, a drop in investment and confusion in the production pipeline.

Trem Smith of Barry Petroleum said that his company lost $54 million, or 40 percent of its value, in the 48 hours after the Nov. 19, 2019 announcement of the initiatives. Tim Crawford of Sentinal Peak Resources said half the company's development has been disrupted. Russell Johnson of Associated Builders and Contractors said more than $30 million in projects have been halted.

"This industry is critical to us," 2nd Dist. Supervisor Zack Scrivner said at the close of the meeting. "We are willing to do whatever it takes to protect it."

At Scrivner's invitation, three representatives of Gov. Gavin Newsom's administration attended the meeting, listening to passionate appeals from oil industry employees, teachers, citizens groups, construction trades, union locals, non-profit organizations, small businesses, youth organizations and independent oil producers. The meeting began at 2 p.m. and the last public speaker spoke at 7:50 p.m. Many had to leave before they had the chance to be heard. 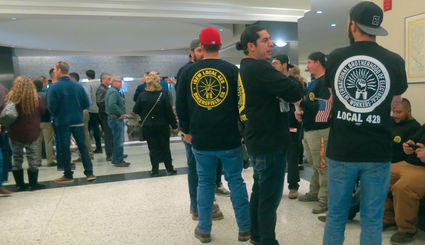 Union members whose jobs are linked to the oil industry turned out in force. Others who came to the meeting – some from Los Angeles and elsewhere in the state – provide supplies and materials to the industry.

The oil and gas initiatives that unleashed the pent-up groundswell of protest are based on legislation, Executive Orders and regulations designed to battle climate change that have been accumulating and morphing since 2005 (see sidebar). CalGEM has the responsibility for dismantling the oil industry in California to meet the state government's agenda of carbon neutrality by 2045. Williams called the process "a just transition."

The initiatives specify three state mandates: a halt of approvals of new oil extraction wells that use high-pressure steam to break oil formations below the ground; new rules for public health and safety protections adjacent to oil and gas extraction sites; and the independent audit of pending applications for hydraulic fracturing and other well stimulation practices.

The industry is fighting back on several fronts. California has the most rigid oil industry environmental standards in the world. If we want to be good stewards of the earth, Scrivner said, we can produce here safely and responsibily rather than sending our money to other countries with few environmental safeguards and lousy human rights protections. The state's "managed decline" of the industry means the loss of thousands of high-paying jobs for people with high school educations.

How did we get here?

April 2015 – Gov. Jerry Brown signs Executive Order B-30-15, setting an intermediate target of reduction of greenhouse gas emissions to 40 percent below 1990 levels by 2030. 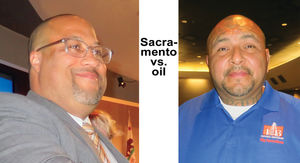 Uduak-Joe Ntuk, supervisor, California Geologic Energy Management Division (CalGEM): on the pause in drilling permits: "We are responding to unsafe conditions." Right, Jerry Flores of E&B Rig Operations: "I've been in the system, the CDC (Calif. Dept. of Corrections) half my life. The oil industry gave me a career opportunity. I bought a home for my family. I never thought I'd be able to do that."