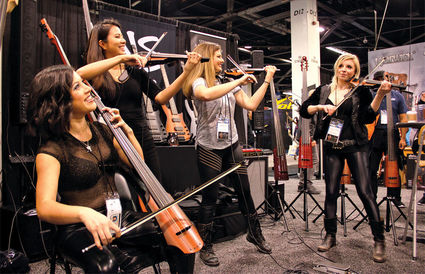 Our yearly trip down to Anaheim, Calif., to the convention for the National Association of Music Merchants (NAMM) was fantastic, inspiring, enlightening and a blast. I was invited to travel with musician friends Bruce Berger, the TPops lead upright bass player, lead clarinet player Wayne Thompson and our conductor/clarinet player Jim Peck.

Our ride down to Anaheim in Bruce's Tesla was very enjoyable, as well as environmentally friendly. The Model S Tesla is a fantastic car. I like the smooth ride and convenience features such as the heated steering wheel, automatic trunk, adjustable suspension (useful when it snows), easier access and larger trunk. The auto pilot functions are interesting as they ease the driver's work load. Unlimited supercharging is also a great feature especially for longer road trips. It was a great riding experience.

Since its inception in 1901, NAMM has evolved from a national retail association into an international association whose members now include commercial companies, distributors, affiliates and manufacturers.

As I am a student bass guitar player I first made a beeline to my favorite bass guitar maker, Master Guitarist Luthier Roger Sadowsky. Since 1979, Sadowsky has been creating instruments that are timeless and cutting edge, with the legendary Sadowsky sound that is immediately recognizable both live and on recording. His instruments are played by many of the world's greatest artists including guitarists Jim Hall, John Abercrombie, Pat Metheny, Lee Ritenour, Chuck Loeb and bass players Marcus Miller, Will Lee, Rickey Minor, Michael Rhodes, Verdine White and Jason Newsted.

In December 2019, Sadowsky teamed up with Hans-Peter Wilfer of Warwick GmbH of Germany. This partnership will allow Sadowsky and Wilfer to bring a full range of quality instruments and accessories to musicians worldwide under the Sadowsky brand name. Sadowsky said, "I am very proud to announce this exclusive licensing agreement with Warwick GmbH of Germany. The agreement will allow me to return to my roots and spend more time at my workbench while allowing more players to have access to my instruments than ever before." 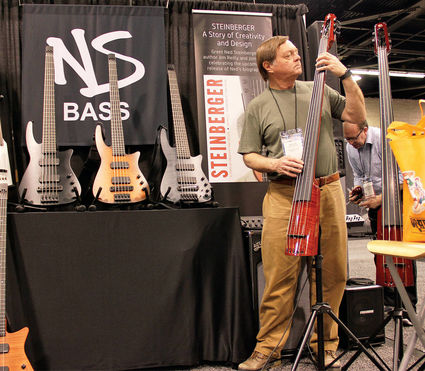 My next stop was the EBS Professional Amps booth. In my opinion they make some of the best professional amplifiers for both small and large venues. EBS always has some of their artists performing at their booth. Poliana Magalhaes, a world class bass player, was performing and it was amazing.

Another stop was the NS Designs booth to see Quartet 405 play. Elizabeth Chorley, a violinist, is the leader of the group. She has worked with Burt Bacharach, among others. She, and the musicians with whom she plays, are considered to be some of the best in the world.

I highly recommend attending the NAMM Show if performing music is your thing. I want to thank Bruce Berger, Wayne Thompson and Jim Peck for the ride down and Debbie Hand and Peter Cutler for the passes for entrance into the NAMM show.