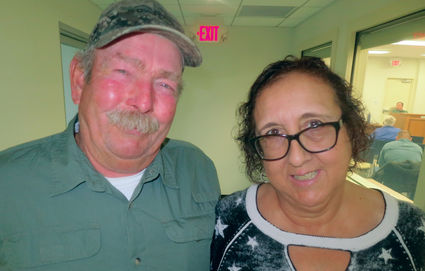 When employees at the Tehachapi-Cummings County Water District were faced with a problem that seemed impossible to solve, they had one go-to solution:

That would be Rodney Michael, a 25-year water district employee who began working for the district on Aug. 2, 1994 and has just retired. The district board honored Michael with a resolution of recognition and appreciation at its Nov. 20 meeting at district headquarters at Brite Lake.

Water district employees who worked with Michael attended the presentation.

"He has good mechanical instincts," District Manager Tom Neisler said. "The job he did is the hardest job we have in this district."

"It's been fun," Michael said as he received the plaque. "Things have changed. Now I am not getting up at 4. I get up at 7."

A native of Bakersfield, Michael, 61, was lead mechanic for 18 years. He kept the massive pumps for the water pipeline running smoothly and assigned jobs to other mechanics.

The mechanics are on call every fifth week for eight days for 24 hours, and they must respond within 30 minutes, he said.

With his wife Peggy proudly at his side, Michael said that he looks forward to spending time with his grandchildren. They have three children, sons Rodney Michael II, Jason Michael and daughter Korie Nylander. The family has grown to nine grandsons, one granddaughter and two great-grandsons.

He said they plan to visit his mother in Missouri.