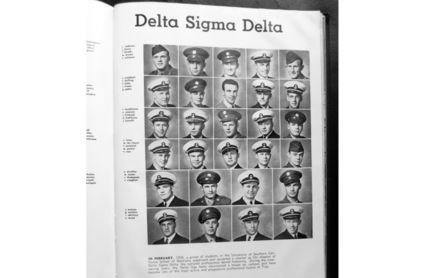 In 1944, World War II battles raged in the South Pacific as the Americans and Allies gained foothold after bloody foothold in the push toward Japan. In the European theatre, the Allies had moved from North Africa north into Italy and were fighting from village to village on the march against the Axis forces. On D-Day of that year, the Allies would launch the greatest land invasion in history to retake the continent. U.S. war strategists, looking ahead, secretly set Oct. 1, 1945 as the day the Allied forces would invade the Japanese mainland, at the estimated cost of millions of lives.

At home young men awaited their orders and their fates.

They look proud. What did they see in their future but duty and obligation? How many of them had to squelch their civilized nature to engage in life or death fighting? How many of them returned to the United States to fulfill their academic and professional promise? How many of them died in the snow at the Battle of the Bulge or on a rocky beach at Peleliu?

Male students disappeared regularly from campus residences as they shipped out for training and deployment. "Losing more men to 'boot camp' than any other platoon, the final platoon in Williams was considerably undersized as the semester drew to a close," says the copy under a picture of Company 7, Platoon 3 of Navy residence Williams Hall. "Composed of many future Navy pilots, as well as deck officer candidates, the 3rd was led by Ralph Starkweather, who had such drilll experts as Larry Alexander, Jack Doerr and Joe Barish under his wing."

The Marine detachment at USC, the book says, "had shrunk at the end of three semesters from nearly 300 members to a mere 135."

The fraternities struggled to keep their houses open as members moved to the campus military barracks or shipped out. Several of the fraternity buildings became residences for women students, who were a substantial percentage of the students on campus.

The Chi Phi fraternity "... this year remained on campus despite the loss of 100 members to the armed forces."

Delta Sigma Phi "has continued operating in their house on the 'row' in spite of wartime handicaps. The house has proved a welcoming for many Delta Sigs on leave from the army and navy."

Company 3, platoon 9 of Newkirk Halll, a Navy dorm at USC.

For the Kappa Sigma fraternity, "The coming of war wrote a duration finis to much of the old Kappa Sig tradition. The chapter house was converted into a women's dorm shortly after the last brothers left." The fraternity then held their meetings at the student union.

The Phi Sigma Kappas "moved from their house to various barracks on campus."

Medical and dental students were in the military. Thirty-two of the 36 members of the Trojan men's glee club were also in uniform.

Before completion of the yearbook, the government called editors LaMarr Stewart and Tyler MacDonald to active duty. The staff carried on, apologizing for any mistakes made "under the stress of wartime shortages."

USC won the Jan. 1, 1944 Rose Bowl 29-0 against a depleted University of Washington Huskies team, which had lost a dozen players to active duty, including two of their best players. Both teams were from the Pacific Coast Conference due to wartime travel restrictions that kept east coast teams away.