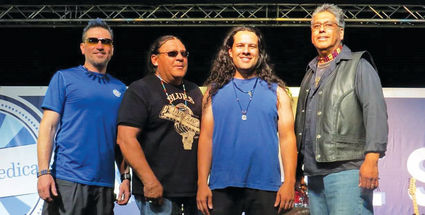 Blue Mountain Tribe, a local Tehachapi Native American band, has been nominated by NAMA (Native American Music Awards) for best Live Video Recording for "Children on the Rez." Blue Mountain Tribe has made it to the top five! They will be attending the awards ceremony in New York at the Seneca Casino near Niagara Falls on Nov. 3. The band is also very honored to be one of the presenters at the Awards Ceremony. For further information, visit http://www.nativeamericanmusicawards.com.

Children on the Rez by Blue Mountain Tribe