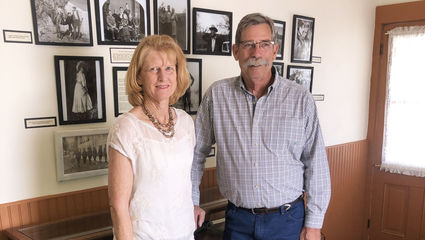 Fred Fickert and his wife Anne visit the new exhibit on the Fickert Ranch and family in the Errea House Museum.

On Saturday, Oct. 5, Fred Fickert and his wife Anne visited Tehachapi for the opening of the Fickert Exhibit at the Errea House Museum and for the dedication of a plaque commemorating the historic Fickert Ranch Cemetery in Bear Valley Springs. The exhibit in one of the bedrooms at the Errea House features a walnut Victorian bed and dresser from the old ranch house, along with many photos of the Fickert family, going back to the current Fred Fickert's great grandfather, the original Frederick Fickert and his wife Mary Glenn Fickert who settled in Bear Valley in 1869. Other photos show life on the ranch.

One item of note on display is the old iron stove which was originally in the one room school house located on the ranch. After its service at the school, the structure was moved next to the ranch house where it became a bunk house. When Bear Valley Springs became a residential development and resort, the building was moved to the area of the general store. The old stove was donated by Fred Fickert and was restored by Jon Hammond.

Later in the afternoon, the dedication of the plaque was held at the Oak Tree Country Club. The highlight of the day was Fred speaking about growing up at the ranch, telling anecdotes and answering questions from the over 100 attendees. It was a rare opportunity for Bear Valley residents and other history buffs to imagine living on an almost 28,000 acre working ranch with no other residents around but the cattle, the deer and other wildlife.

The plaque was the idea of Janice Armstrong Hagen who heads up the Cemetery Interest Group which meets monthly to research, commemorate and document cemeteries in Kern County. The small private cemetery is off Deertrail Drive, on a bluff overlooking the valley. Other than the original Fickert family members, there are several other grave sites of ranch hands and Native Americans. Janice headed up the fundraising and planning of the event with help from the Tehachapi Heritage League, Jane Baron, and the BVS CSD. The plaque was designed by Kerri Esten of Graphic Expressions.

The Fickert Exhibit at the Errea House is open during regular Museum hours of noon to 4 p.m. on Fridays, Saturdays and Sundays. For more information call the Museum at (661) 822-8152.