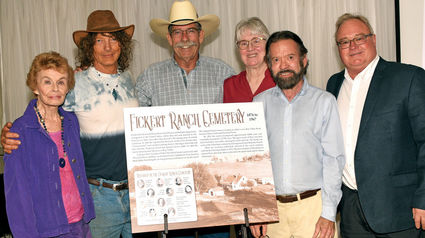 On Saturday, Oct. 5, the dedication of the historic Fickert Cemetery in Bear Valley Springs was held at the Oak Tree Country Club and attracted an audience of over 100 people. This has been a long time coming. The cemetery is off on a little cul-de-sac and has never actually been groomed or really recognized, but it holds the graves of many members of the Fickert family who ranched the valley for a hundred years – from the 1860s to the 1960s. Fred Fickert and his wife, Mary Glynn Fickert, were the original ranchers of this valley and owned the 25,000 plus acres that makes up the community today. Fred Fickert Jr., a great grandson of the couple, still comes back to visit and has several friends in the community. He grew up here and shared several stories with us of his childhood and teen years on the ranch. More about that in a bit.

Janice Armstrong, who lives next door to the cemetery, has a strong attachment to it and felt that this was a piece of Bear Valley history that has long been ignored and needed to be brought forth. With the help of Charles White, President of the Tehachapi Heritage League, Judy Reynolds, Tehachapi Museum Director, and Director Jane Baron of the Bear Valley CSD Board. Janice put together a plan to dedicate this historic site in perpetuity. The BVS CSD Board is involved as the property where the cemetery sits is actually owned by the district.

Janice Armstrong opened the proceedings and introduced Charles White, who said a few words, thanking all who were involved. Even the Tehachapi Association of University Women played a small part.

Fred Fickert Jr. shared some wonderful stories with us about being saddle sore after a very long day on horseback, from early morning till 10 at night, rounding up cattle before the winter set in. They had 300 head of mostly Hereford cattle early on and built it to a herd of over 600 cattle. He grew up on the ranch through the '40s and '50s, finally graduating in 1962 and going off to college. His famous aunts, Nellie and Louise, were already old when he grew up, but they were still tough as nails. Nellie was an excellent horseback rider and Louise was an excellent shot. They both managed the ranch in later years until they sold it to Dart Industries in 1969, to Fred Jr.'s profound regret.

He told us of a time when a prisoner escaped from CCI and came walking up into the valley. There was no secure gate or gatehouse in those days. The sisters called the prison and told them they had a missing prisoner. The prison officials were not sure whether to believe them, because to their knowledge nobody was missing. But sure enough, after a head count, they sent a prison vehicle up to the ranch. Meanwhile, the prisoner had climbed under a horse trough in their yard to hide. He made a hasty exit, though, when he discovered a rattlesnake under the trough. He headed to the prison vehicle and the relative safety of the prison.

Another time a rustler was caught climbing over a barbed wire fence when a shot whizzed past his ear. A woman's voice (Louise) called, "Where do you think you are going?" "Home," he said, and climbed back over the fence and escaped.

Fred Jr.'s father didn't bat an eyelash at Fred driving the ranch truck while he was still underage, but one time Fred was down near Arvin, around the Tejon ranch, when a CHP patrol officer stopped him. "So, where are you going, young man?"

"Through that gate there, officer, " he said, pointing to the gate.

The officer said, "Do you have a driver's license?"

"Well, I will let you go, but I'm going to watch you get through that gate, and your dad had better drive you home."

The plaque will be displayed on Lower Valley Road North, just below the cemetery. It is well detailed and lists the people interred there. So, next time you are driving along that stretch, keep an eye out for the plaque. It is a worthy dedication to the pioneers who ranched here for a hundred years.