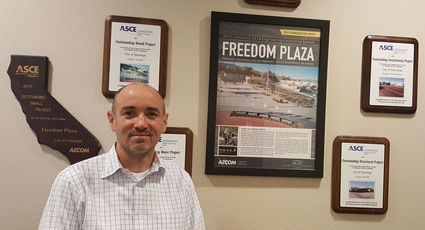 The Los Angeles Section of The American Society of Civil Engineers (ASCE) will be honoring Tehachapi Development Services Director Jay Schlosser on the evening of Oct. 5 in Long Beach. Schlosser has been awarded 2019 Outstanding Civil Engineer in the Public Sector for the Los Angeles Section. He had been honored at the local level on Sept. 19 by the South San Joaquin branch making him one of seven competing for the honor. He and two other engineers will then go on to compete at the Regional level. Region 9 consists of 17,824 civil engineers. ASCE is the oldest civil engineering organization in the country so there is no doubt that this is a huge honor for Schlosser, his department and the City of Tehachapi, especially since this is the first time individual awards have been given by the society.

Both awards came as a complete surprise to Schlosser who had no idea he had even been nominated. What made the honor so much greater was the fact that the nomination process was initiated by a co-worker at the City. Associate Engineer Andrew Norton, who heads the Engineering Department, learned that the award was being offered and approached City Manager Greg Garrett, who agreed an application should be submitted. Even Schlosser's wife knew of the application and successfully kept the secret.

"Jay's ability to manage, engineer and deliver projects is second-to-none," said Garrett. "Every city project has his fingerprint on it. Jay has certainly set the bar higher. I couldn't be more proud."

Letters of recommendation that accompanied the application were received from Ahron Hakimi, Executive Director of the Kern Council of Governments, Jeff Lingerfelt President of Adventist Health Tehachapi Valley and Ben Horn managing engineer at AECOM who had been Schlosser's supervisor for 10 years.

"Jay is the personification of calmness in tough situations," wrote Hakimi, who worked with Schlosser when he was Chairman of Kern COG's Transportation Technical Advisory Committee. "He has promoted trust and accountability through his consistent and honest actions; he imbues integrity in his employees and peers with his actions and words."

Norton could not say enough about Schlosser. "He is a great mentor," said Norton, "he has a talent for forcing growth – he pushes you. He helps solve problems without getting upset and shows you how to use it for growth." Norton added that Schlosser fosters a team environment.

Tehachapi Councilman Phil Smith, who has been involved with Kern COG for many years, said, "Jay is a stellar individual who happens to have an engineering degree and a work ethic beyond reproach."

Jay Schlosser received his Bachelor Degree in Civil Engineering from UC Davis in 2000 and his Professional Engineering License in 2003. He worked as a civil engineer before joining the city. He began working with the City in the mid 2000s and immediately attracted recognition for his work. Kern COG has honored the city for the Restoration of the BeeKay Theater and the Tehachapi Train Depot, projects that were overseen by Jay Schlosser.

The American Society of Civil Engineers (ASCE) has over 100,000 members worldwide divided into 10 regions with 9 being within the United States. Founded in 1852, it was formed as a professional organization that allowed civil engineers from across the country to meet and exchange ideas and information. For many years this prestigious organization has awarded its members for projects completed at the branch, section and regional level. Since 2015 Tehachapi's Development Service Department, under the direction of Jay Schlosser, has received seven project awards from ASCE including the Tehachapi Police Department (Outstanding Structural Project), Freedom Plaza (Small Project of the Year 2017), the Snyder Well Intertie Project and 2018 Outstanding Bikeways & Trailways Project for the Tehachapi Blvd. Bike Path.

"I am extraordinarily honored,"said Schlosser, stressing that he is extremely flattered that the nomination was made by his colleagues.