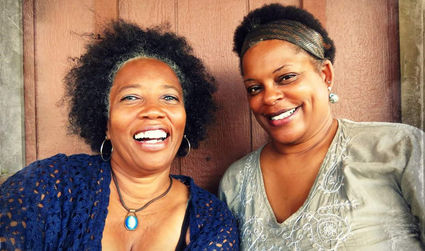 Summer is ending and Fall is in the air, as the expression goes. While Summer is always full of fun and excitement, the Autumn season seems to encourage a bit more personal reflection and soul-searching as the year winds down. Accordingly, Fiddlers Crossing's concert schedule for the end of September and October will reflect the mood of the season with a series of singer-songwriters, each having their own unique approach. The first concert, on Friday, Sept. 27, features Lisa Sanders and Karen "Brown Sugar" Hayes, with their blend of soulful country-blues, folk, gospel and Americana.

Sanders spent some of her childhood in Philadelphia before the family moved to California. She has appeared in Tehachapi once before, in a special BeeKay concert, "Night of The Lisas," produced by Gary Mazzola in 2009.

Sanders first met Karen "Brown Sugar" Hayes back in high school. Later in life they met again when their children were in the same class in school. They became best friends. Neither one of them realized then that one day they would be a "couple of moms writing together and performing all across the country." They have since become a musical powerhouse, opening for Bonnie Raitt, Lucinda Williams, BB King, Al Green and many others.

Lisa Sanders and "Brown Sugar" are a compelling duo on stage. The songs are honest, direct and aimed straight for the heart. Sanders's textured vocals are full of life experience. Hayes's well-chosen and soulful harmonies add further depth and intensity. Her on-stage relationship with Sanders adds humor and some spice to the show. As one reviewer put it, Hayes "has large, mischievous eyes that suggest she knows something she's not telling."

On performing together Sanders says, "She is my muse. Having Karen sing with me is like heaven."

Fiddlers Crossing is at 206 E. F St. in Downtown Tehachapi. Tickets may be purchased at Mountain Music, Tehachapi Treasure Trove, Tehachapi Furniture in Old Town and Lucky's Barbershop, or online at http://www.fiddlerscrossing.com. They can be reserved by calling (661) 823-9994. Tickets to the concert are $20, and coffee and goodies are included. The concert begins at 7 p.m. Doors open at 6:30 p.m.