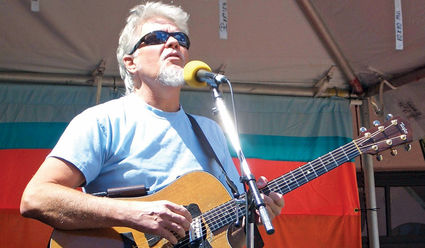 The Blues comes in numerous shades, and Fiddlers Crossing has presented many of them over the years. Dana Hubbard occupies one shade all by himself. He will be in concert at Fiddlers Crossing, Saturday, Sept. 14 at 7 p.m. This will be his second appearance at the downtown venue.

Hubbard is a master of the blues guitar. Using a slide on his little finger, he gets more sounds out of one guitar and two hands than seems humanly possible. Hubbard has won award after award in the blues genre. He has performed with or opened with some of the greats of blues, jazz and folk, including, Sam Bush, David Wilcox, Greg Allman, Etta James, David Lindley and Little Feat.

Hubbard is a native Californian, born and raised on the Central Coast. He attended UC Santa Cruz only long enough to finish an elective course on country blues. Then, he hit the road and never looked back. He started the way many acoustic musicians start, by busking on the streets, in his case Berkeley and San Francisco. Eventually, he put together his own band, The Delta Twisters, playing blues clubs for more than a decade. He moved on to an electric guitar for a while, playing bigger venues and theaters.

He returned to the acoustic guitar with his second album and is a virtual one-man band on the instrument. Hubbard's guitar playing has been called "amazing to watch and a joy to listen to." You hear the bass and the backbeat rhythm along with the melody and chords, and look around in vain for his backup guitar player. He does all this while singing his own songs, often addressing social or environmental issues with a twinkle in his eye and a blues man's grin.

Fiddlers Crossing is at 206 E. F St. at Robinson St. in Downtown Tehachapi. Tickets may be purchased at Mountain Music, Tehachapi Treasure Trove, Tehachapi Furniture in Old Town, and Lucky's Barbershop or online at http://www.fiddlerscrossing.com. They can be reserved by calling (661) 823-9994. Tickets to the concert are $20, and as always, coffee and goodies are included. The concert begins at 7 p.m. Doors open at 6:30 p.m.