When Tehachapi was partly defined by the old pear orchard

Pear trees turn white with blossoms when they bloom.

As you drive down Curry Street past the Tehachapi fire station, on the east side of the road there's a surprisingly large open space. A portion of this big field near Phil Marx Central Park used to be where the Tehachapi Mountain Festival carnival set up every year. This wasn't always open space, however – for 72 years it was home to a large pear orchard. It was one of the defining features of that part of town.

Here's some background about pears: pear trees are amazingly long lived. Governor Peter Stuyvesant brought a young rooted pear tree with him from Holland in 1647 when he arrived to become the director-general of what was then called New Amsterdam. He planted it on the corner of 13th Street and 3rd Avenue in the city that became New York when the British assumed control in 1664.

That same pear tree bore fruit for more than 200 years, until it was felled in 1867 when two large horse-drawn wagons collided and one of them was thrown against the old tree and snapped it off. An impressive lifespan, eh? Well, another early colonial leader, John Endicott, a Puritan who was the first Governor of the Massachusetts Bay Colony, planted a pear tree in Danvers, Massachusetts in 1630 as his children looked on. That tree survives to this day, 389 years later, and still bears fruit. It is believed to be the oldest continuously cultivated fruit tree in North America.

Some of the first pears grown in California were planted by David Osburn on Sutter Island in the Sacramento River Delta in 1860. He imported Bartlett pear trees from France, and they were brought around Cape Horn on a sailing ship. Some of those same pear trees are still alive and bearing fruit at Stillwater Orchards near Courtland, on a farm owned by Osburn's descendents, the David Elliot family.

Benjamin Franklin even gave a nod to the longevity of pears in his Poor Richard's Almanac, when he wrote that "If you set [plant] an apple tree, you'll live to see its end; but if you set a pear tree, you set it for a friend." Meaning, of course, that if you plant a pear tree, it may well outlive you.

The most famous orchard in the history of the Tehachapi Mountains was the Bartlett pear orchard planted by Burt Denison in 1910, in that big empty field east of Curry Street that I referenced at the start of this story. Mr. Denison had been the owner of the Oak Creek Lumber Company, a saw mill and box factory that he established in the 1890s, and later a general store and a hay and grain yard and mill.

In 1909 he bought 40 acres and planted pears, and they were such a success that he eventually had a total of 120 acres of pears. Pear trees grow slowly and don't start to produce much fruit until their fifth year, so Denison planted other crops between his little pear trees, including berries and currants.

Denison's orchard was later owned by the Bisbee family and was known as the Bisbee Orchard for many years, and then was finally owned by John Nunes. The trees were still bearing fruit when Nunes had them removed in 1982 to make way for development that largely still hasn't happened. The housing tract just south of Phil Marx Central Park, which includes Pepper Drive, Apple Way and Holly Drive, was built on land that was home to the Denison Orchard for 72 years.

The pear orchard loomed large in the life of Tehachapi residents who lived here during its lifespan – countless Tehachapi people worked in the orchard over the years, lighting smudge pots in the spring to protect the blossoms against late frosts, and then later thinned the green fruit so that the remainder would size up, and finally picked the fruit and sorted it in local packing sheds.

I worked there during the last years of the orchard, when Tehachapi grower John Pulford – who now owns and operates Pulford's Appletree Orchard on Highline Road – managed the orchard for John Nunes. You got paid $5 to spend the night in the old bunkhouse there, essentially on call so if the temperature dropped to 30 degrees, you would go out and light smudge pots filled with #2 diesel oil. The heat and smoke they generated helped protect the blossoms from a killing frost, which is caused by temperatures of 28 degrees or lower for two hours or more. If you did have to go out at night and light smudge pots, you got paid $10 and were allowed to show up late to high school without penalty. 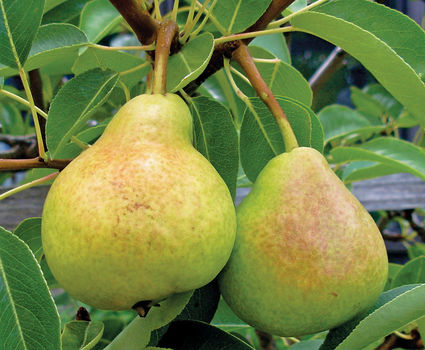 Barlett pears get sweet and flavorful in the Tehachapi Mountains.

Tehachapi kids walking to junior high or high school when those schools were located on Snyder Street and Anita Drive had green pear fights in the late spring, and then later helped themselves to some of the fruit when it ripened in late summer. Tehachapi kids sometimes had their first kiss in the old pear orchard, and those who experienced the pear orchard growing near the center of town still remember it with fondness and nostalgia.

In the spring, the old trees would be alight with the snowy white blossoms of pears, glowing in the early morning or late afternoon sunshine. . . it could be a truly magical forest of fruit trees.