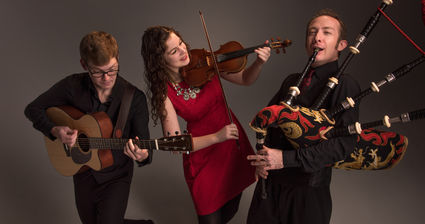 Fiddlers Crossing has presented a wide range of acoustically-based music styles since its opening in 2010. From traditional folk to contemporary Americana, bluegrass, acoustic blues, old-time American dance music, singer-songwriters to jazz and even world-punk, with the recent appearance of Kick Stomp Ensemble. One of the mainstays of the venue has also been Celtic music from Ireland, Scotland, Wales, Cornwall, Brittany and many other areas in Europe and parts of Canada. The music, with its driving rhythms, irresistible melodies and obvious passion, mesmerizes audiences everywhere. In keeping with Fiddlers Crossing's policy of bringing to Tehachapi the best this musical genre has to offer, the venue will present The Fire, a Santa Cruz-based trio that performs what they call "Blazing Scottish Music." The group will perform on Friday, Aug. 23, at 7 p.m. at Mountain Bible Church, located at 630 Maple St. in Tehachapi.

Those who have attended any of the "Winterdance" concerts presented locally every December since 2014, will immediately recognize David Brewer, the high-energy, virtuoso bagpiper, flute, whistle and bodhran player of the group Molly's Revenge, featured in that show. He has toured with Scottish super-group Old Blind Dogs and the aforementioned Molly's Revenge across the U.S., U.K., Canada, China and Australia. He's been a special guest of the six-time Grammy award winning group The Chieftains, and was a key musician for the sound track of the PBS documentary, "Andrew Jackson, Good, Evil, and the Presidency."

Providing the rhythmic backbone on guitar and bouzouki is Adam Hendey, a multi-instrumentalist and composer who has performed in Ireland, across the U.K. and U.S. He's played and studies with members of Lunasa, Flook and Molly's Revenge. Hendey graduated from the Robert D. Clark Honors College at the University of Oregon with majors in music and philosophy and has recently attained a masters degree at the Royal Conservatoire of Scotland, studying traditional music and specializing in guitar performance.

The Fire has performed their "Blazing Scottish Music" on stages throughout the U.S., the U.K. and Ireland. On Aug. 23, they will ignite in Tehachapi.

Tickets may be purchased at Mountain Music, Tehachapi Treasure Trove, Tehachapi Furniture in Old Town, at Fiddlers Crossing during the Wednesday Open Mic nights and Lucky's Barbershop, or online at http://www.Fiddlerscrossing.com. For reservations, call (661) 823-9994. Tickets to the concert are $25. The concert begins at 7 p.m. Doors open at 6:30 p.m. sharp.