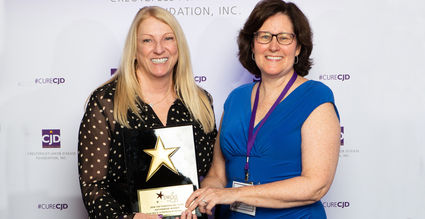 The recognition was presented during the CJD Foundation's Family Conference, which took place in Washington D.C. July 12-15, and brought together prion disease experts and families affected by prion disease.

Last year was the inaugural event for Bakersfield which joined with 14 other cities across the U.S. including Chicago, Boston and Atlanta.

A video produced by Hall Ambulance Service in association with KERO 23 ABC detailing the onset and rapid progression of Mayor Hall's illness, his family's sudden loss and how his wife was inspired to become an advocate to find a cure for CJD, premiered at the banquet.

Creutzfeldt-Jakob Disease is caused by "prions," proteins that can misfold in the brain, with devastating effect, including rapid mental and physical deterioration. Prion diseases are invariably fatal. In the early stages of the disease, CJD patients may exhibit failing memory, behavior changes, impaired coordination and/or visual disturbances. As the illness progresses, mental deterioration becomes more pronounced, and involuntary movements, blindness, weakness of extremities and, ultimately, coma may occur. Sporadic CJD usually occurs later in life and typically leads to death within a few weeks or months to one year following the onset of symptoms.

Harvey L. Hall, Bakersfield's 25th Mayor, and EMS pioneer as the founder of Hall Ambulance Service, lost his life to the sporadic form of CJD on May 19, 2018, just two weeks and seven hours after diagnosis.

Searching for answers, his wife of 28-years, Lavonne C. Hall, found solace in discovering the CJD Foundation and through its website learned about the Strides4CJD events. After reading about the success of events in other communities, she was inspired to organize an event in Bakersfield in an effort to create greater awareness about prion disease while providing an opportunity for those who knew her husband to gather in remembrance of his contributions to Bakersfield and Kern County.

In less than two months, they were able to pull together a successful event thanks to the support of the community, business and media partners, and Hall Ambulance employees and their families who participated in the 2-mile leisure walk or 5K. Proceeds from Strides4CJD allows the CJD Foundation to provide family support, medical education and funding for research programs related to Creutzfeldt-Jakob Disease.