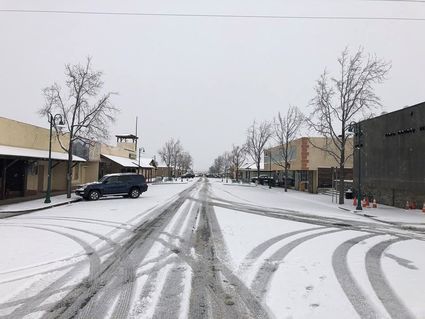 Looking North on Green St. during the recent snow on Feb. 21.

I had heard multiple comments over the last few months that it doesn't snow in Tehachapi "like it used to" or like "when I was a kid." I know my former classmate Jon Hammond even wrote about that sentiment recently as well. Thanks Jon, it seems like it hasn't stopped snowing since.

The recent series of snow storms added to the charm of Tehachapi and brought back those memories of "real" snow. Not the one-inch icy varieties that became commonplace the last few years, but a real measurable snow that played into the hands of our scenic landscape.

One of the City staff members recreated an archived photo from Green Street in the snow in 1916, and took a photo in last week's snow from the same spot, 103 years later. It was one of our most-popular posts on social media. It's nice to be reminded of that history through the lens.

Those that have lived in Tehachapi for some time remember those snow storms, when kids spent the mornings sledding because school was normally cancelled, then they peeled off wet clothes and snow boots before settling in for hot chocolate by the fire. One night my cousin and I camped out on our front yard on Bartlett and woke up to several inches of snow on our sleeping bags. Of course we were too cold to get up and go inside the house. Those were the days.

It's nice to be able to recreate those memories from time to time and allow the next generation to enjoy those moments as well. I'm sure there were plenty of them during the last set of storms.

I'd like to thank our public works team for their ongoing efforts during the winter months. While snow and ice can be pretty, we all know the inherent dangers. Our crews worked to plow roads, lay down ash to encourage ice melt, monitor storm drains and shovel pedestrian access areas near public buildings. This consists of long hours in rough conditions, but I believe we're all pleased with the results they provided. The City must continue even amidst inclimate weather and that team is a vital part of those efforts. 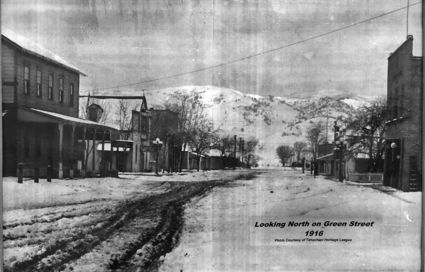 The snow did cancel our monthly "Coffee with the Mayor and City Manager" event due to the inability of The Coffee Mill to open that morning. It was also a good idea not to have folks on the road that early while conditions were still risky. We'll reconvene on March 21 and I look forward to hearing your questions, comments and concerns over some great coffee.

I hope you enjoyed the slice of "real" winter once again in our community. The weather is very cyclical so who knows if this will be a regular winter-feature once again or we'll have to wait a few more years for something this substantial to fall from the sky.

Either way the City of Tehachapi will continue to be prepared to minimize the impact weather has on our operations. It's never a perfect system, but we like to have our response be as close to perfect as possible when these weather events occur.