Tehachapi High School hosted Tehachapi's FIRST Robotics Team 585 grand robot unveiling and chili cookoff fundraiser on Saturday, Feb. 23 to an enthusiastic crowd in the school cafeteria. The event featured a silent auction of items donated as fundraisers, a special guest speaker and much more. This year's theme is titled "Destination: Deep Space," and involves a specific challenge the students will meet in a nation-wide series of competitions.

Keynote speaker Abby Dobbins is the F135 jet engine flight test engineering manager for Pratt & Whitney at Edwards Air Force Base. Her presentation detailed how her career developed out of a love for aviation and was aimed at encouraging young students to get a well-rounded education in support of their chosen careers.

But it was the students of FIRST Robotics Team 585 who took the spotlight. Team President Chloe Shadduck and Vice-President Julian Romero presented the hurdles they face with this year's challenge, which was revealed to all teams across the nation simultaneously on Jan. 5. That gave the team less than seven weeks to analyze the challenge, develop a strategy and a design concept, make the plans, develop and program the robot and present the robot in its completed state. As you can imagine, this put this team of students through a rigorous academic, engineering, programming and construction project where teamwork and cooperation were critical in order to qualify for the competition. 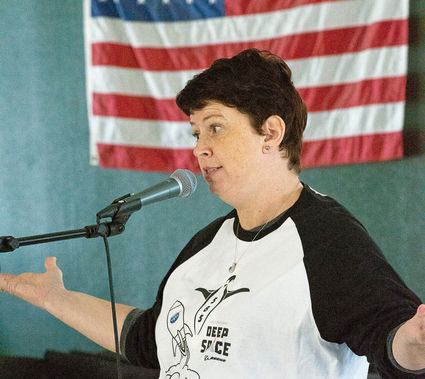 This sort of team effort, combined with the STEM (Science, Technology, Engineering, Mathematics) skills necessary to complete the project is exactly the kind of challenge that will prepare these students to be successful in real-world careers. This is an inspiring example of what these young people are capable of doing.

In fact, Tehachapi's teams have been so successful in years past that they have won the coveted "Chairman's Award" in five of the past seven years. Pretty good for small-town Tehachapi, huh? Well, it doesn't hurt that this team has gained the support of important sponsors such as NASA, the Department of Defense DoDSTEM organization, Lockheed Martin, Boeing, United Technologies, Northrop Grumman, SPower, Scaled Composites, Sierra Technical Services, National Instruments and Society of Women Engineers.

If you ever wondered whether important and valuable educational opportunities existed for young people in our town, look no further than the FIRST Robotics challenge.