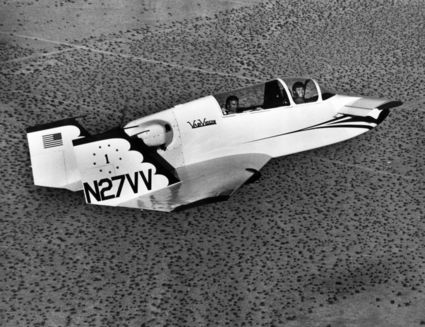 In 1963, at the age of 20, Burt Rutan was inspired to design a homebuilt aircraft after seeing the North American XB-70 Valkyrie and the Saab 37 Viggen. He called his creation a VariViggen and was at work with the initial plan while attending Cal Poly San Luis Obispo in 1964-1965. He earned his BS degree in Aeronautical Engineering in 1965. Later while living in Lancaster, Calif., Burt built a model of the VariViggen and conducted some 'wind-tunnel' testing on roads on the east side of Lancaster, with the model attached to the top of a car.

Burt said that they actually had this model attached to the top of a station wagon, and would go out at night when the winds were down and got up to speeds of 80 or 90 miles per hour.

He used radio control to move the rudders, the ailerons and the elevators and the model was sitting on a spherical bearing, just a big rod end, so it would trim to angle of attack, trim to a slip and he had springs on roll and he could move the ball bearing forward and aft for different CGs (center of gravity).

This testing gave him aerodynamic data that gave him confidence to go and build his own 'homebuilt' airplane in what he called, 'this weird configuration.'

Keep in mind that designing and building model airplanes was not new to Burt. He didn't want kits, he wanted Mom Rutan to purchase balsa wood at the hobby shop and he would design his own airplanes. He wanted balsa wood that was 36-inches long, 3-inches wide and 1/16-inch thick and it cost 16 cents. He competed in many airplane model meets near his home in Dinuba, Calif. and won when he was a teenager!

His brother Dick didn't mind U-control kit models and would build them and have fun flying, until they hit the ground. Burt would pick up the pieces and design something totally new out of the pieces.

From 1965 to 1972 he was a civilian flight test project engineer for the U.S. Air Force at Edwards Air Force Base, working on nine separate projects including the LTV XC-142 VSTOL transport and spin tests of the McDonnell Douglas F-4 Phantom fighter. He left to become Director of Development of the BD-5 aircraft for Bede Aircraft in Newton, Kansas, a position he held until 1974.

From 1968 to 1971, Burt began fabrication of his VariViggen in a garage in Lancaster. He used model airplane structural techniques to fabricate the VariViggen. He used Sitka Spruce and Birch plywood and used epoxy glue and staples to fasten it all together.

He finished the VariViggen in 1971 and got it almost ready to fly, but his job at Edwards sent him to St. Louis for four to five months. He was there to do the flight test planning stability and control flight test for the F-15 fighter.

While on TDY (temporary duty), he built an RC model of the VariViggen to test the flying qualities. It didn't want to rotate and he crashed the model many times. Several months later, Burt quit his job at Edwards and went to work for Bede Aircraft in Kansas. He loaded his VariViggen into a moving van, packed his furniture around it and did his first flight in Newton, Kansas in May 1972.

The Model 27 VariViggen was a two-place tandem seat aircraft with a wingspan of 19-feet. The empty weight was 1,020 pounds and gross weight was 1,700 pounds. Powered with a 150 horsepower O320-A2A engine, maximum speed was 144 knots true air speed, or cruise at 131 KTAS.

Two of Rutan's first employees at the Rutan Aircraft Factory (RAF) were Mike and Sally Melvill who decades ago bought a set of Rutan's VariViggen plans out of the back of Burt's car at the Oshkosh airshow for $51, built the plane, flew it to Mojave from Indiana and both were hired that day. The Melvill's worked for Rutan for 29 years before retiring in 2007.

Burt took Mojave Airport General Manager, Dan Sabovich for a ride in his VariViggen and Rutan Aircraft Factory began business at Mojave Airport in 1974, developing the VariEze aircraft. Later Burt Rutan design's made first flights at Mojave Airport, including: the Quickie, Defiant and Long-EZ prototypes and the one and only Voyager aircraft, piloted by brother, Dick Rutan and Jeana Yeager, that made the epic flight around the world in 9 days, 3 minutes, 44 seconds, beginning on Dec. 14, 1986 and ending on Dec. 23, 1986. 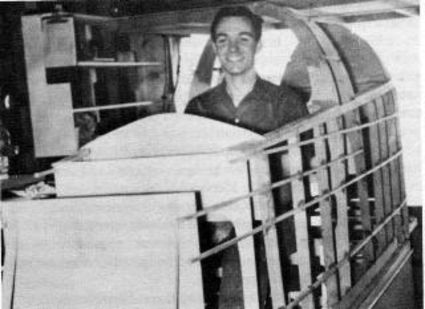 Burt Rutan is an innovative, legendary, genius aerospace designer who chose Mojave to design, build, test and fly some of the most impressive, unusual aircraft and spacecraft in the world. We appreciate him and his brother, Dick Rutan, for their dedication and passion.