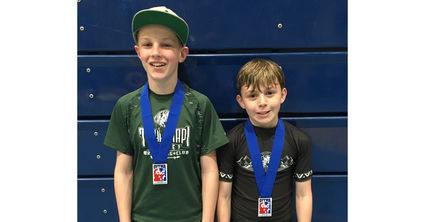 In the Middle School division, Levi Hart Battled his way to a first place win. In Levi's match he got caught doing some moves and gave up points right away. Second period there was some discrepancy in points scored and the period ended in a tie. In the third period it was a back and forth fight with Levi in the final seconds, getting on top and pinning his opponent with his favorite Saturday Night Pin. Michael Murillo dominated his way to winning his 148-pound division.

Reese Hart made it to the finals and placed second. Reese met the same girl she got pinned by a few weeks ago. We have been working on some moves knowing she was going to wrestle her again. She lost but did not get pinned so that's a victory for Reese. Others competing were Edward Reyna, Andrea Montano and Marcus Coates.