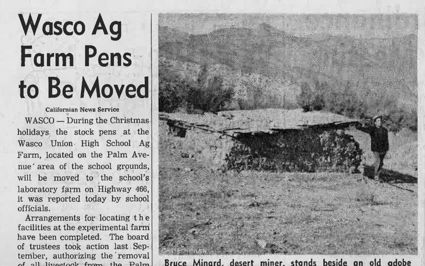 Bruce Minard standing beside an old adobe structure, which he told the group was an old whiskey still.

After participating in an arduous campaign for the last four months I am finally able to breathe again and get back to the things that I love to do, including writing this column about East Kern history, as told by my Mother Marion Deaver.

This time I choose to write about two desert field trips taken by some members of the East Kern Antelope Historical Society.

While the articles my mother wrote about the explorations are not all that informative I would like to point out some of the differences in reporting from the early '60s to now.

For instance, the historical society members visited an area above Jawbone Canyon on Cross Mountain, climbing to find a large cave. The cave was reported to have been inhabited by "Indians" who roamed over East Kern.

As you all know political correctness is now the norm and "Indians" are referred to as Native Americans. Neither is wrong for their time, but as we know times change.

Over the years "explorers" of the large cave had found a skull with an iron arrowhead embedded in it, now referred to Native American Artifacts.

Minard was full of stories for every occasion, so I am not so sure about a photo from this article which shows Minard standing beside an old adobe structure, which he told the group was an old whiskey still.

The photo shows Minard in the early '60s, clean-shaven and in fairly normal clothes. When I knew him in the '80s he had a six-inch beard, loose clothing and was not very clean. The stories however were still the same...

In a second article by my mother, the historical society members traveled up Sand Canyon to view Native American artifacts, this time by Piutes (Kawaiisu). The group visited an area full of potholes made by the "squaws" (Native American women) who used stones to grind food.

I remember going on this field trip when I was a child. The group looked at the area with the potholes and then went to an Indian (Native American) cemetery, located just up the canyon. There were several local Native Americans who were on the trip to give information about the area.

I also remember my mother "breeched" the gate to take a photo. The Native Americans got in their truck and left, not happy with any of us entering their sacred ground.

At the time I was young, but I thought that I needed to learn about different belief systems and traditions, because I felt bad and embarrassed that it happened as it did.

Discussing how things change I have included a photo of two of the women on the fieldtrip. They are daintily sitting on a large rock next to some potholes – perfectly normal right? 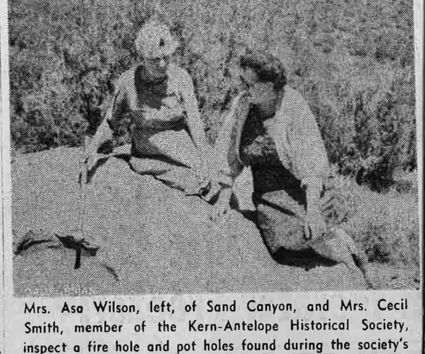 Mrs. Asa Wilson (left) and Mrs. Cecil Smith sitting on a large rock next to some potholes.

Both women are wearing nice dresses and shoes with low heels (not tennis shoes.) The caption for the photo identifies each woman as Mrs. Cecil Smith and Mrs. Asa Wilson.

In that same caption today the women would be identified as Ms. Gladys Smith and Ms. Wilson. They would be wearing designer jeans and expensive running shoes...and not be worried about how they would sit.

I read a lot of old newspapers and I don't even need to check the date, just check how women are referred to and I know if it is pre-or-post 1960s.

I was married in 1968 and my mother said I should sign my name as Mrs. Wiley Strahan, but no, I signed my name as Mrs. Susan Strahan. The Ms. came after I was divorced in the early 1990s.

All of these articles are correct for their time in history, but as we have progressed proper language has evolved. How we refer to others is still evolving today and probably will again tomorrow.