How well do you know the Tehachapi theater scene? 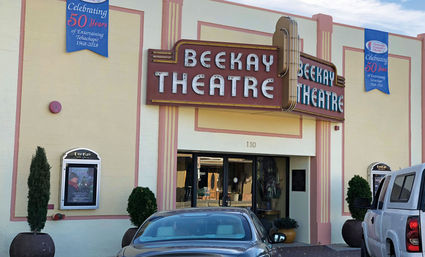 Did you know, the original BeeKay marquee was the first neon sign in Tehachapi when the theater opened in 1936? The City of Tehachapi had an exact (although more proportional) reproduction made for the BeeKay reconstruction in 2008.

(Scroll down below this article for answers.)

Question 1: What does the BEE and the KAY stand for in BeeKay Theatre?

Question 2: In what year was the BeeKay constructed?

Question 3: Where did TCT make its first home?

A. TAPA - now the Slice of Life Enrichment School building

C. The current downtown location of the BeeKay Theatre

Question 4: Who was Tehachapi Community Theatre's first board of directors president?

Question 5: What two plays in the current season were past hits with TCT audiences?

A. "Young Frankenstein" and "Sherlock Holmes and the Case of The Christmas Carol"

B. "The Little Foxes" and "The Foreigner"

(Scroll down below this article for answers.)

Answers to trivia questions about theater life in Tehachapi

Answer 1: The BEE was Mr. Frank Baumgart & the KAY as Mr. Louis Kanstien - The two business partners thought it was a cleaver partnering of their last names. Their portraits are part of the mural on the Centennial Plaza side of the theater.

Answer 2: Both - The theater was originally constructed in 1936 and was rebuilt in 2008. The theater had burned down in a fire with only the four walls remaining in 1994. Through a joint partnership between the City of Tehachapi and Tehachapi Community Theatre, the theater was rebuilt. The restored theater was dedicated on December 6, 2008.

Answer 3: While TCT has made its home at all three locations the now closed Wells School Auditorium was home to TCT from 1968 until 2003. TCT then moved to the Tehachapi Academy of Performing Arts (TAPA) from 2003 to 2005 and to its current home at the Beautiful BeeKay Theatre in 2008.

Answer 4: The colorful John King was the first TCT board president when the theater was formed in 1968. He and his wife Barbara were always front row center, attending most opening nights, and never missed a production. They were loved and are greatly missed by their TCT family.

Answer 5: “The Little Foxes” and “The Foreigner” were produced by TCT in the last 50 years. They are being revived and produced this season as a nod to our theater’s past, along with the new classics “Young Frankenstein” and “Sherlock Holmes and The Case of The Christmas Carol.”