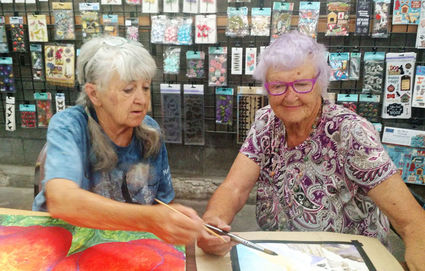 September First Friday at Tehachapi Treasure Trove will feature Betty Flores and Sherrie Harris. Betty has been dabbling in art since she was able to draw in the dirt. Her sister, Sherrie, has been painting with watercolors for about 10 years. They are currently addicted to paint pour and have found innovative ways to combine pouring with traditional painting techniques. In addition, Betty is an accomplished potter.

Betty and Sherrie were born in Texas four years and three months apart. They were raised primarily in South Carolina after their father, a welder in the atomic energy business, was transferred there. The girls grew up with horses and ponies and, as a child, Betty trained and showed ponies while riding behind in a small cart that her father built. Betty continued to raise and breed horses and ponies after she moved to California at age 21. In California she worked as a pottery painter, owned a pet shop and then for 25 years worked in the entertainment industry acting, dancing and singing.

Sherrie worked for many years as an airline stewardess for American Airlines. During her service with American, she spent eight years flying military personnel in and out of Vietnam until the end of the war. During that time, she was stationed in Honolulu, Hawaii where she started to work with watercolors and joined to a watercolor painting group. She still prefers watercolor. Both sisters were recently introduced to paint pour techniques and have done a number of interesting pieces combining and paint pour with mixed media and traditional painting techniques. They have also created some very unusual mixed media pieces. They currently live with their horses, ponies, donkey, dogs, cats, exotic chickens and parrots in Sand Canyon.

Come join us to say "Hi" to Betty and Sherrie and have some food and wine while listening to Art Larson on clarinet. Tehachapi Treasure Trove is located at 116 E. Tehachapi Blvd., right across the street from the water tower in Railroad Park. Hours are daily 10 to 5 p.m. (Sundays 11 to 4 p.m.). Be sure to stop by and see our collection of uncommonly eclectic and unusually unique stuff. Remember we carry an extensive line of art and craft supplies and artist services along with yarn, music and a jewelry studio.

For additional information on any of our activities, classes and events, please call (661) 822-6794 or visit http://www.facebook.com/Tehachapitreasuretrove.

First Fridays have become a popular event of fun, refreshments, hospitality and shopping at the participating venues.

Tehachapi Treasure Trove is located at 116 E. Tehachapi Blvd., right across the street from the water tower in Railroad Park. Featuring Betty Flores and Sherrie Harris.

Come join us to say “Hi” to Betty and Sherrie and have some food and wine while listening to Art Larson on clarinet.

(See article on this page).

Located at 102 W. Tehachapi Blvd. (across from The Tehachapi Railroad Depot) with a broad variety of items, refreshments and music. Open until 8 p.m.

More than eight local vendors will be available from 5 to 8 p.m.