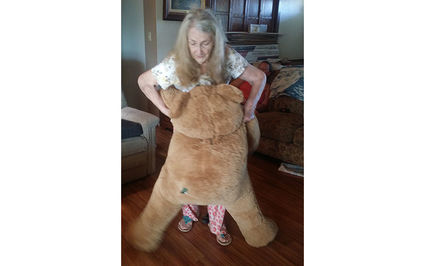 Lillian Virginia Tanner, better known as Virginia, Gennie, Mom, Grandma, or lately Granny, passed away on May 11, 2018. She was 83 years old.

Virginia was born on May 6, 1935, to parents Robert and Lida (Jones) Toney. She had one sister, Laura, and two brothers, Robert and George. There was also a baby sister that died within days of her birth. Mom always mourned her loss. The family lived in a small four-room house overlooking a beautiful mountainside in West Virginia. There was a wood-burning stove in the kitchen and a potbelly stove for warmth in the living room. The children shared a bedroom, and the parents had the only other room. The children were sent to school, but it was a long walk down the hill in the snow to the school bus stop, and an even longer walk back up the hill, slipping and sliding in the snow after school. At 11 years old Virginia started working in a restaurant, washing dishes and busing tables, to help with finances at home. Her father was a coal miner, and there wasn't much money.

Virginia eventually followed her sister out to California where she met the man she would marry and spend the next 56 years with, Harold Holmes Tanner, Jr. Together they raised three children, Patricia (Dolly), Harold, III (Buddy), and William (Billy). They also had a very active role in the lives of her husband's first four children, Carl, Pam, George, and Richard.

Virginia was always busy. When her children were small, she would take sewing classes at night and make beautiful clothes for herself and Dolly. After they got a bit older, she and Harold would take dancing lessons every week. They loved to go out dancing. She kept her children busy too. When school let out in the summer, they went to summer school, always taking a fun class and a class they needed help in. She made sure her children always took at least one session of swimming lessons, and the boys played baseball. She kept the boys in Boy Scouts, and she was a Blue Bird/Campfire Girl leader with Dolly. She always babysat and earned extra money to save for vacations and extra things she wanted for the home. Her husband always had a boat that he had restored, and the family summer vacations consisted of many camping trips, from weekends on the river to weeks at Eagle Lake and up into Oregon. They one time spent a week at Postill Lake in Canada. When camping, her family always woke up in the cool morning air to the smell of her coffee perking and bacon and pancakes on the camp stove. Vacation could also mean a cross-country road trip. There were several trips made to see family in Wisconsin, West Virginia, Georgia and Florida. Family was the most important thing to both her and Harold, and they saw to it that their children saw most of this great country in their travels.

Virginia eventually went to work for the now-giant electronics company, Advanced Micro Devices. She worked her way from an entry level mark and pack position to a test supervisor, all without a high school diploma. She would train new supervisors with college degrees. She loved this career and left only because of a botched surgery that left her disabled for the rest of her life. But retirement had been planned for. She and Harold had purchased a 5-acre mini ranchette in Jenny Lind, Calif., where they built with their own two hands and a little help from family, a two-story home with a beautiful porch overlooking a large pond Harold dug with his tractor and stocked with fish from their fishing trips. Harold built a small dock on the pond and put a row boat and a paddle boat in it. Virginia was at peace and happy there. They raised chickens, duck, geese, pigs and a cow. They had horses and a much-loved black lab named Joe. They also raised rabbits for a business; they had about 500 rabbits at one time. They had 50 fruit and nut trees and always planted a big garden. The grandkids loved to spend summer vacations with Grandma and Papa. When her husband's health deteriorated and the farm was too much work and too far from doctors, they sold the farm and bought a big house in Linden, Calif. This also eventually became too much work, and they sold and bought a smaller home in Escalon, Calif. The wonderful neighbors there helped Harold keep up with the yard work. He, in turn, built cabinets and different things he was skilled at to help them out. Virginia purchased a couple of knitting machines and took knitting classes. She made beautiful sweaters, skirts, pants and blankets.

When her husband died in 2006 after a 5-month battle with cancer, the hospice nurses were so impressed with her care of him that they thought she should come to work with them, but she had worn herself out. She had been scheduled for knee replacement surgery and Harold passed the day before, allowing her to have the needed surgery. She recovered well at first, but before a year was over, suffered a stroke that took her short-term memory and led to dementia. Her sister, Laura, had been living with them for a few years, and the two of them were able to take care of each other for a short time. Laura had to be placed in a nursing home and Virginia couldn't live on her own, so in 2010 she came to live with her Tehachapi family. She loved going to First Baptist Church in Tehachapi and participated in women's teas and Bible studies, until the dementia progressed and she was not able to continue.

She was preceded in death by her husband, Harold; brother, Robert; sister, Laura; son, George; and her parents.

A special thanks to the caring staff at Optimal Hospice, who were there at a moment's notice anytime we needed them and took such loving care of Mom.

Wood Family Funeral Service was entrusted with her care. Condolences may be made at http://www.woodmortuary.net.