'Down under' singer-songwriter, Jackie Bristow comes up July 13 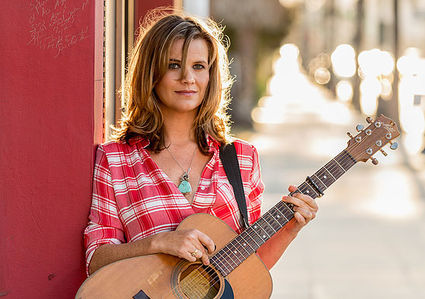 Fiddlers Crossing prides itself in bringing performers from every corner of America and beyond to play in Tehachapi. In addition to the United States, musicians and singers from Canada, Ireland, Scotland, England, The Netherlands, Norway, Sweden, The Shetland Islands, Germany, Switzerland and South Africa have performed at the downtown venue's concert series over the eight years that it has been in existence. One part of the world that has not been represented thus far is Australia or New Zealand, often referred to, colloquially, as "down under." On Friday, July 13, that will be remedied with the appearance of singer-songwriter, Jackie Bristow, accompanied by guitarist, Mark Punch.

Bristow was born and raised in Gore, a small rural community in the lower half of New Zealand's South Island, and home to New Zealand country music's Gold Guitar awards. Her singing career began at the age of eight, when she took a shine to church hymns at St. Mary's Primary School, inspired by her music teacher Walter Hailes. Encouraged by their grandmother, piano teacher Molly Scully, Jackie and her younger sister Katrina entered the Gold Guitar awards as children. By the time she was 11, the duo was sweeping up a string of awards in various categories. By the age of 14, the "Bristow Sisters" were gigging regularly throughout the South Island. Around this time, she began to mine her parents' record collection, discovering classic songs from Elvis Presley, Linda Ronstadt and even "Solid Gold Hits!"

Bristow began to write her own songs, a secret passion that would remain hidden from the world for the next seven years. At 17, she left high school and enrolled in the Invercargill Polytechnic Music School, where she hooked up with local musicians. She spent the next 18 months singing regularly in pop and cover bands all around New Zealand. The professional Bristow had by then immersed herself in the music of Rickie Lee Jones, Bonnie Raitt and Crowded House.

Performing was fun, but she could no longer ignore the desire to write and perform her own material, which had been growing steadily since leaving Invercargill in 1994. She went to Sydney, Australia, where she gradually wrote, recorded and performed her original songs, playing late-night bars to empty rooms, saving pennies and working as a nanny to make ends meet. It was in Sydney that she met her now longtime friend, Mark Punch, who provided her with great perspective and the musical career guidance she had been missing until then. He will be accompanying her on lead guitar for this show at Fiddlers Crossing.

Bristow has shared the stage with many of her musical heroes. Opening for Bonnie Raitt in New Zealand on her 2013 "Slipstream" tour was a dream come true. She was invited back in 2017 to join Raitt on her "Dig in Deep" tour. She has also opened for the Steve Miller Band and Foreigner as well as Tommy Emanuel, Joan Oates, Joe Ely, Madeleine Peyroux, Art Garfunkel and many more.

Her live performances have captivated audiences and reviewers alike. One reviewer of her show on the Tommy Emmanuel tour wrote: "Opening for a musical giant like Emmanuel would seem a daunting task, but Bristow was relaxed as her soulfully-seductive melodies reverberated within the auditorium. Her beautiful voice and earnest songs resonated with the audience, and they applauded her eagerly. Near the end of the show, Bristow joined Emmanuel on stage for an amazing duet that received a standing ovation."

She has released four albums, the latest, "Shot of Gold," released in 2016 received critical acclaim and charted in her native New Zealand.

Bristow now calls music mecca, Nashville Tennessee home. She tours the U.S. as well as New Zealand and other countries regularly. Fiddlers Crossing will be just one stop of many this summer for the "down under" singer-songwriter.

Fiddlers Crossing is at 206 East F Street at Robinson Street, in Downtown Tehachapi. Tickets may be purchased next door at Mountain Music, at Tehachapi Treasure Trove, Tehachapi Furniture in Old Town, and Lucky's Barbershop, or online through

http://www.fiddlerscrossing.com. Tickets to the concert are $20, and as always, coffee and goodies are included. The concert begins at 7 p.m. Doors open at 6:30 p.m.