Going to the dogs

I don't often talk about the dogs here, but they are an integral part of the ranch. If you have been here, you have probably met most of them. At the very least, you have spent time with Doug, Dolly and Lady.

Each dog here comes from the pound or a situation of need and I highly recommend that if you are looking for a dog, you start at your local animal shelter. These dogs know they were rescued and they are grateful.

I will never understand how anyone can take a 12-year-old dog to the shelter and leave it there. What must these dogs think while they wait for euthanization. I say that because the likelihood of someone taking on an older dog is pretty slim. But wait: I have done it four times in the last six months. (So maybe it is not all that unlikely?)

First, there was Lady, an 11-year-old chow mix. She was at the shelter totally shut down, hiding under a cot. I think she was surprised when she was brought out for a meet and greet. My grands were with me and immediately fell in love with her. When it was our turn at the counter, the officer helping us told my granddaughter Faith, "Honey, this is a really old dog. We have puppies back there." I was so proud of Faith when she responded with, "Puppies always get a home. We want the old dog because she needs us."

It was during this adoption that I spotted Doug, a bull mastiff. If you have been to the ranch and met Doug, well what can I say? This boy is so special. He is a massive guy with an intimidating look. It is no surprise that people come to the ranch and take pictures of camels, zebra, bison, etc., and then post a picture on Facebook of their kids with Doug saying something like, "We had fun at the ranch. They have camels, zebra and a really great dog named Doug."

In the last month, it seems I am collecting old dogs with tumors and warts. It started with Cali, a chocolate lab. I was headed to the barn to look at a pony at the Lancaster Animal Shelter when I spotted her. I make a point of not walking through the kennels instead going between where the turnouts are. There she was, just lying there. She did not respond when I spoke to her. I started crying right there and cried all the way home with her in the backseat. I never saw the pony. Cali is 12 and a half. She was an owner surrender. Her condition is not great, but I have her on medication for her aches and pains and she is improving. Every morning she is at the back door and when I go out, she bounces like a puppy (a big, fat, lame puppy). There is nothing that makes me happier than seeing this girl happy.

Next came Akuma. When I took Cali to my vet he noticed I was collecting old dogs with warts and tumors and asked me to meet Akuma. Akuma was brought to my vet for treatment, but the people could not afford the bill and basically left him there a couple of years ago. You guessed it. This old guy is going to spend the rest of his life at the ranch instead of in a kennel at the vet's office. Surprise: Dolly, my beautiful and sweet pit also came from my vet. His vet tech found her on the railroad tracks and in two years they had not been able to place her.

Then, a friend asked me to go to the pound with her to look at an older dog. This one had been there for three months. Her time was up and she had been moved to "that row of kennels." She looked just like Cali, and once again, she was a 12-year-old owner surrender. And again covered with warts and tumors. My friend decided she really couldn't take on another. You guessed it, Princess is home with me.

It's not like I need more dogs. I already had two seniors when I began "collecting." Sparky is a 23-year-old Lhasa Apso who is blind and deaf, but really doesn't seem to notice. Wicket is a terrier cross who came to the ranch 13-years-ago. They have been here since the beginning. 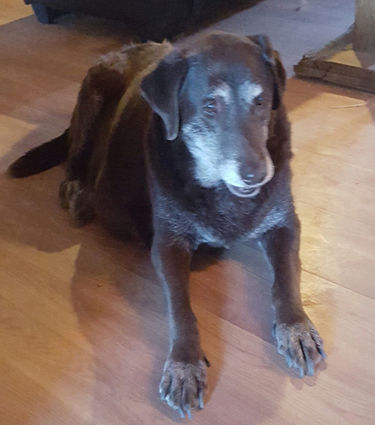 It's a lot of dogs. But each of them is special. I know, given their ages, I will have some sad times coming, but for now, I am loving the good times. At night, I sit and rock on the deck listening to the sounds of the ranch. And I look down and realize my deck is "wagging." The pack is happy. Grateful dogs loving the life. Who better to share the ranch with?

Come on out and meet the critters, and don't forget to say "Hi" to my pack. If you are thinking of getting a dog, consider adopting.