PCT hikers who make their own gear 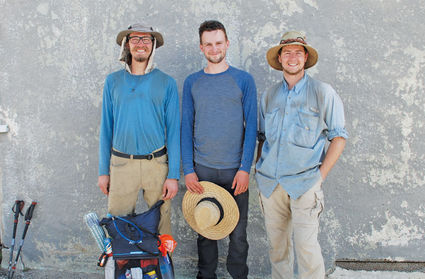 Three hikers stopped at Wits' End. From left: "Catch Up", "Fly By" and "Robin Hood", hikers who designed and made their packs.

This time of year Tehachapi sees hundreds of Pacific Crest Trail hikers. They come from all over, some to hike all the way from the Mexican border to the Canadian border and some to complete a section or two. They carry most of what they need for the three to four month journey with them, picking up replacement supplies along the way. Their equipment, designed for long distance hikers, can be expensive and somewhat heavy. As a result, more and more hikers are learning to make their own packs from ideas found on the internet.

Recently, three such hikers visited Wits' End Hiker Depot in Tehachapi. Austin Gonegos (Catch Up) from Rochester, Michigan was making repairs to his pack before heading back out on the trail. His fellow hikers, David Heese (Fly By) from Karlsruhe, Germany and Nathan Ackerman (Robin Hood) from Freeland, Michigan planned to spend the night camping at the Tehachapi Airport. All three, as it turned out, are engineers and met on the trail.

Catch Up said he had done long distance hiking before and found the equipment too expensive and too heavy, so he learned to make his own pack by watching YouTube videos.

Fly By said this is not his first handmade pack. He made his first one three years ago on one of his hikes on the 850km Camino de Santiago in Europe. That pack lasted him the entire trip. In this pack he designed his tent to double as his rain poncho. He bought aluminum tubing and molded it to form the perfect fit for his back and covered it with mesh. He purchased his reinforced fabric online and designed the pack with mesh side pockets. He said that his pack cost him about 60 euros. Along the way he has also designed his own camp shoes, sun glasses and has invented a bag that can double as an inflator when filled with air. 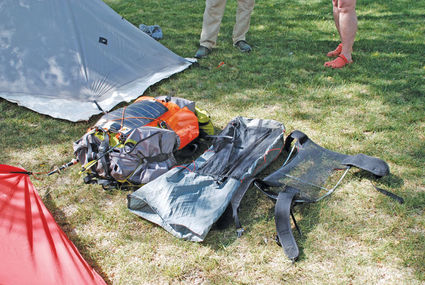 Robin Hood got his trail name for making his pack out of carbon fiber arrows which he bought from Walmart. He has picked up extra arrows along the way to carry in his pack in case of an emergency. He said that his pack weighs about 40 pounds including water and cost him about $120 to make. He is currently sewing side pockets that he can add to the side of his pack. Both hikers said that mice and squirrels are a constant threat to their packs. The vermin eat through the mesh and their side pockets making sewing skills a necessity.

Fly By plans to complete his trip to the Canadian border in the next three-and-a-half to four months. Robin Hood got sand in his shoes and was taking a day for his feet to heal. He will go only as far as he can by June 18 when he has to go back to Michigan and start a new job.

Thank you to Trail Angel Patty Yeomans for giving us a heads-up about these fascinating hikers.