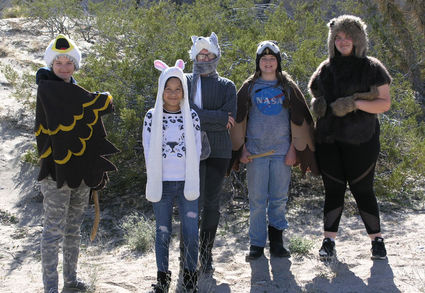 Owl and The Bear play cast.

The "Owl and The Bear" is a cautionary tale about the perils of vanity in which Muhu the Owl's need for admiration leads to his good looks being crushed during a big bear hug. Leif Hanson of Quartz Hill will play the part of Muhu the Owl. Newcomers Faith Torres will take on the dual roles of Xus the Bear and Deer, and Greisy Medina will play Rabbit. Kirstin Warren of Lake Los Angeles will play Eagle, and Zoe Hanson of Quartz Hill will reprise her role of Coyote.

The history of theater at the museum dates back to 1932 when museum founder Howard A. Edwards wrote an Indian pageant. It was performed annually outdoors, near the museum, from 1932 to 1935. Edwards' drama students from Lincoln High School played the main roles, and local friends and neighbors played the secondary roles. Edwards named his outdoor stage Theatre of the Standing Rocks.

Advance tickets are on sale at the Antelope Valley Indian Museum gift shop Saturday and Sunday from 11-4 p.m. Remaining tickets will be available for purchase at the door on a first-come first-served basis on May 5. Food will be available for purchase from 6 p.m. until 9 p.m., so you can enjoy dinner either before or after the play. The play will start at 7:00 p.m. and last until 7:30 p.m. After the performance, the museum will reopen until 9 p.m.

The event is a fundraiser for the Friends of the Antelope Valley Indian Museum. Please, no pets. For more information, phone the museum at (661) 946-3055 (711 TTY relay service), or visit our website at http://www.avim.parks.ca.gov. Join us on Facebook at http://www.facebook.com/AVIndianMuseum.

Event: Owl and The Bear

California State Parks provides for the health, inspiration and education of the people of California by helping to preserve the state's extraordinary biological diversity, protecting its most valued natural and cultural resources, and creating opportunities for high quality outdoor recreation. Learn more at http://www.parks.ca.gov.