Fred and the 'Duke' 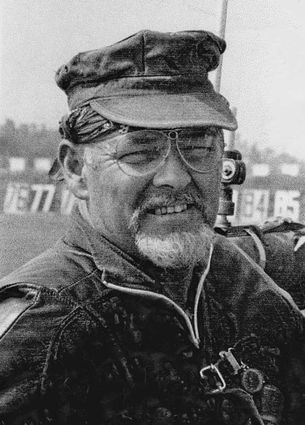 Sometimes when reliving memories of years past I think of something that is just too good to keep to myself. My husband and his friend, Sergeant Major Frederick W. Filkins, were what you would call "brothers in the Corps." Both served in World War II, both were with the China Marines, veterans of Korea and Vietnam. They often found themselves in the same duty station during the thirty years they spent in the Corps. One day, many years back, when Fred was telling one of his experiences, I turned on a tape recorder. It would seem that during the filming of the movie, "The Sands of Iwo Jima" in 1950, he and some Camp Pendleton Marines were called upon to chauffeur some of the movie people to different areas on base. In the process Fred was exposed to the presence of the legendary, John "Duke" Wayne. It's a good tale.

"In late summer of 1950, the movie 'The Sands of Iwo Jima' was being filmed at Camp Pendleton. The terrain of a tropical island beachhead and Mt. Suribachi could easily be simulated in the some 120 thousand acres that make up Camp Pendleton, near Oceanside, California. We jokingly agreed that if John Wayne, the star of the film, didn't quit making movies about Marines he'd have more time in the Corps than we did.

"I was a Corporal at the time and was given the job of driving the film people around in a jeep. A friend of mine, Cpl. Dave Dorn, also had the same job. We were rubbing elbows with such stars of the day as Adele Mara, John Agar, Forrest Tucker and Martin Milner. We thought this was great duty.

"I recall sitting in the jeep with actress, Adele Mara and her secretary watching the landing of the amtracks on the simulated Iwo Jima beachhead. I saw this guy take a nose-dive off the top of an amtrack head first and land in the surf and sand. I said, 'Oh, God, that man is really hurt bad!'

"I remember saying, 'Stunt man or not, that man is hurt!' The scene only took a few minutes to shoot and when the director yelled, 'Cut!' the guy jumped up, brushed off some sand and walked off.

"After work one day we were in a group that John Wayne invited out for a few drinks that evening at an elegant Mexican restaurant and bar, The Acapulco Gardens in Carlsbad, just south of Oceanside. We crowded into the bar and there wasn't much room; some were sitting and others standing. I had my back to John Wayne as I sat on a bar stool. He was standing and drinking with Marines standing around him.

"Dave was sitting by me and just as the bartender served us a drink I heard, the Duke's famous drawl say, 'We don't need that kind of talk in here!' With that he got me by the scruff of the neck and the seat of my pants and lifted me off the stool and threw me out the door.

"I landed on the grass on my hands and knees. I was in my summer uniform for we couldn't leave the base without being squared away so there I was with grass stains on my trousers and none too pleased about it. Dave came out under his own power and I asked him, 'Now, what in the hell did he do that for?'

"Dave said, 'Somebody said some bad language and he thought it was you.'

"Now, it's not that I'm not capable of that kind of language, but I didn't do it! I got tossed out without even hearing what was said. He'd heard the remark and turned around and lit on me. I brushed myself off and told Dave, 'He can't do that to me! I'm going in there and straighten that guy out. Come on!'

"Dave could probably foresee a court martial in my future and me in the brig and them 'piping daylight' to me if I began to straighten out the Duke. He said, 'Nah, Fred, leave it alone! Don't ruin a good thing.'

"Once again, good old calm Dave said, 'Look at it this way; you can keep your stripes and someday tell your grandchildren that you were thrown out of a bar by no one else but the famous John Wayne.'

"He helped me calm down and I thought about it for a moment and agreed that is was a damn good idea and today, these many, many years later I have the grandchildren to tell it to.

"The next day, back in the jeep, I was told Dave and I could be in the picture if we'd just drive the jeep up and over a hill, which of course, we did. The acting instructions we received consisted of, 'Don't look at the camera when you go by.'

"After the picture was released in 1951, any Marine could get in free if he had on his dress blues. So, I put on my blues and went to see my film debut in a John Wayne movie. I guess I ended up on the cutting room floor because I sure wasn't in the movie. I not only got thrown out of a bar by John Wayne but I got thrown out of his movie, too!"

Note: My husband, Doyle, and Fred affectionately referred to one another as "Dirty Doyle Gracey" and "Filthy Fred Filkins". That may be the cleaned up version for my ears; who knows? By the way, I had an e-mail from Filthy Fred not long ago. He lives in Prescott Valley, Arizona and is of a vintage age of 89, but still hanging in there. Fred was not really filthy nor Doyle dirty but those in the armed services seem to find it necessary to tag names on their friends, as well as their enemies.