The thing about animals 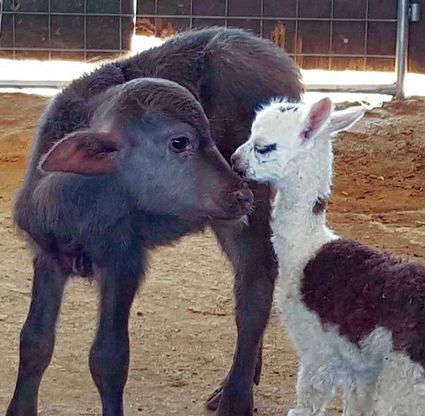 You know the feeling when you start to do something, then you start over, and over, and over? Well, that is the way this article has gone. I had an idea, then Charlottesville happened and everything I thought I wanted to write went by the wayside.

I wanted to rail against the hatred, the intolerance, the violence. I wanted to hit the streets and protest for peace. Instead, I sat and watched the animals and I found peace.

The thing about animals is, they have no agenda. (Well, maybe carrots. Definitely carrots.) They are not motivated by greed, fear, or envy or any of the biases people have.

They hunt for food. They graze. They reproduce. They challenge each other over food or territory. The best sleeping spots are coveted, but once won, the competition ends. Leaders emerge and are respected.

They like you or they don't, but I have never seen hatred in an animal. So why is it so pervasive in people. Why can't we overlook our differences like the animals do?

One big factor, I am sure, is the media. Our thoughts are manipulated by the way a story is presented. Over and over, we are told what to think by organizations that used to report the news and let us think for ourselves. I believe we are born as open to peace as the animals, but learn the biases from our environment.

Well, my animals do not watch the news. Instead, they watch the sun rise and set. They listen to the sounds around them and they listen to each other. They watch each other and draw their own conclusions: "Wow! That is one good looking female camel." "That guy is big. Probably best not to challenge him." "There is plenty of food. No need to fight or argue."

I watch my animals and I learn from them. I have noticed that when animals first meet, they do not interact. Instead, they will touch noses and move on. This happens at least five times before there is any real interaction. They take each relationship slowly. Contrast that to people who immediately want a connection, meaningful or otherwise. In a fast world, fast relationships are the norm and they often lead to disappointment. We need to look more for quality than quantity, and we need to look past our differences to our commonalities.

I have noticed that sheep, both black and white, live peacefully, and beyond that, sheep and goats have no prejudices against each other. There may be the occasional tiff, but mostly there is peace. Horses, donkeys, and zebra get along once the initial intro is over. Sheep, goats, and alpacas can all inhabit the same area and there is peace.

The thing about animals is that they know peace. Why can't we?

I have no answers, only the hope for peace. I think we all want it. We just need to want it more than we fear or dislike those who are different from us.

In a dream world, these pictures show what peace looks like. If you want to experience it first hand, come on out to the ranch and watch the animals. We are open Saturdays from 10 – 4 p.m. through October.