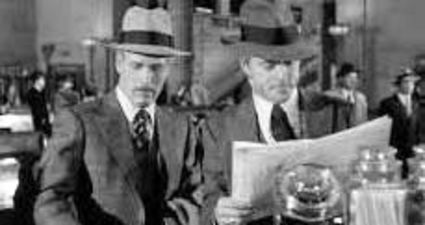 August 24 is fast approaching, and with it, the movie "The Sting" at the Hitching Post Theaters; the way it was meant to be seen-on the big screen in full digital sight and sound PLUS for only 5 buck-a-roonies. What an evening it will be, the greatest caper flick of all time and a free medium soft drink, ta'boot.

Filmed mostly on the Universal backlot using sets that were also used by Back to the Future, this movie literally envelops you in the 1930s and nearly didn't get made. Not only did they have trouble casting the villain-nobody wanted the part-but the script itself languished for a good while in a pile of the unwanted. Suddenly a script reader found it there, read it, and wrote a glowing, prophetic recommendation that got it sold to Universal that very day. That script reader was Rob Cohen, who, nearly 30 years later, went on to direct the first Fast and Furious movie.

That villain who finally accepted the role (only after Paul Newman flew to England and hand carried the scripted to him) was Robert Shaw of Jaws fame. During preproduction, he suffered a painful injury, as did Robert Redford. As you watch the film, see if you can tell what the injuries are. But spotting pain is not what makes the movie worth watching. It's the con-the deceptions, the close calls-the bullets, bait, and the babe-the fish on the hook, and finally, the sting! It's George Roy Hill's wonderfully quick and light direction. It's Newman and Redford's chemistry that delivers both laughs and heart. And it's being drawn into-as only the big screen can achieve-a world where life and death spin on the point of a single, desperate moment. Revenge was never so sweet. But wait, will they ultimately get away with it? Maybe Newman and Redford aren't the only ones pulling a con.

The Sting won 7 Academy Awards, including Best Picture, and was the 4th highest grossing film of all time for at least a little while, which attests to its quality. But this flick goes beyond quality to absolute perfection. As with any con, there are winners and losers. Be a winner. See this flick.

It's 1927. You're a star and making another silent movie. The Jolson flick The Jazz Singer opens in New York. Your world instantly changes. Talkies are TALKING! But that's okay, right? You talk, don't you? But when you do, you sound something like an angry chicken with a beak full of seed. Welcome to the predicament in Singin' in the Rain.

Remember when Debbie Reynolds dropped by Tehachapi last year to see her niece perform at the TCT? Well, Debbie's back in this movie in spades. Here she's only 19 and at that time she lived with her parents. She'd wake up at 4 a.m. and ride three different buses to the studio, and sometimes, to avoid the commute, she would just sleep on the set. This movie was hard work for her. She once said that making the movie and surviving child birth were the two most difficult things she'd ever done. It was not only physically taxing, but emotionally taxing, as well. Once, after hearing some negative criticism of her dancing, she hid under a piano and cried. God was watching out for her that day, for who should walk by and find her there but Fred Astaire. He took her under his wing for a while, teaching her some important moves. But back to physically taxing-in the "Good Morning" number, she danced so hard (as you'll see) that she broke some blood vessels in her feet and had to be carried bleeding from the set.

She wasn't the only one brought to the brink physically by the demanding feats (pun intended). For "Make Em Laugh", Gene Kelly asked Donald O'Connor to revive a trick he had done as a young dancer, running up a wall as a prelude to a somersault. The number was so physically taxing that O'Connor, who, at the time, smoked four packs of cigarettes a day, went to bed (or the hospital, depending on the source) for a week afterwards, suffering from exhaustion and painful carpet burns. To his horror, an accident ruined the initial footage, so after a brief rest, O'Connor slumped back before the cameras to do it all over again.

However it wasn't all pain and exhaustion for the actors. Cyd Charisse went from being just a dance partner on the screen, and you'll see why, to a star, working with such other stars as Fred Astaire and (are you ready) Elvis Presley. 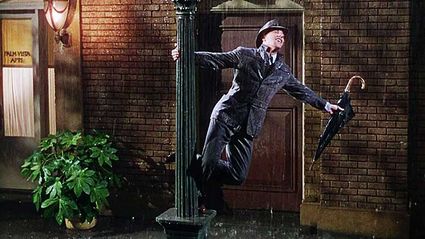 Working probably harder than anyone was Gene Kelly, and no wonder, he was working on two projects at the time: the movie Singin' in the Rain, and getting out of his contract with MGM-he was tired of turning down great movies like Guys and Dolls because of it. You'll see him poking fun at the studio, and he says that the reason he was a bit testy on the set was he wanted to give the studio a hard time. But none of that stopped him from doing some of his greatest work in this picture. The choreography he does to the song "Singin' in the Rain" is iconic.

So-was all the hard work, injuries, tears, and rug burns worth it? In 2006, the American Film Institute voted Singin' in the Rain the #1 movie musical in American film history. I think they were right. This movie makes a great evening when you let the big screen light up your life-great songs, great story, great actors, the trifecta of flicks. Why not make it a "four"-fecta and take a date.