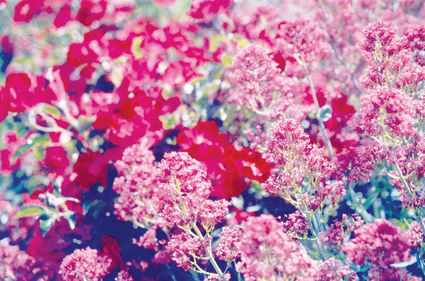 It is not easy for a plant to remain popular when it smells so bad that it is nicknamed "Phu". Valerian (valeriana officinalis of the valerianaceae plant family) is just such a "survivor". The fetid odor is most pronounced when the roots and rhizome are dried so the casual grower may not notice the "dirty socks" stench. I emphasize the name because there is some confusion between this herb and the common garden plant called (valeriana, Jupiter's beard, devils beard and fox's brush). This is centranthus ruber and does NOT have the medicinal qualities of valerian.

Let's explore the attributes that have saved this ancient plant from disfavor. Valerian is believed to be the biblical perfume "spikenard". This seems contrary to its reputation but even today the root oils are used to scent "mossy" perfumes and soaps. In medieval times it was used to cure so many ills that it was called "all heal". Valerian was widely used in Europe during WWI to treat shell shock (the loss of ability to function because of the psychological stress of war).

Legend has it that the Pied Piper of Hamlin, Germany carried dried valerian root with him when he enticed the rats out of town. Maybe it was not just his music after all! An interesting note here is that some cats are intoxicated by valerian (see recipe). A trait that cats and rats may have in common!

The rhizome, roots and oil of the plant are used for medicinal purposes. They are used fresh, dried, infused or distilled for the oil. The flowering tops and leaves are cut off as they appear in order to allow the underground parts to develop. The roots and rhizomes are dried at about 120°F until they are brittle. The resulting product has a bitter taste and a disagreeable odor that is worsened by the dehydration process. When properly processed the result is an effective sedative that does not react with alcohol nor cause dependency. Valerian has been widely used in Europe for many years because it works like valium without its side effects. CAUTION: Do not over-dose or give to children, nor take with other medications, when pregnant, or lactating unless directed by your health care provider.

The oil of valerian is used in some relaxant herb tea blends, cosmetics, ice cream, condiments, liqueurs, soft drinks, beer and tobacco. It is also an ingredient in the bait used to trap rats and wild cats. Quite a varied range of uses!

Flower gardeners may be familiar with the name garden heliotrope. That is valerian not centranthus ruber (Jupiter's Beard). Nursery plants are sometimes mislabeled so ask for either plant by its botanical name. Valerian is a perennial that grows well in rich, moist soil. It tolerates a wide range of pH and likes sun to partial shade. The pink or white clustered flowers grow on long stems that can provide a lovely backdrop for low growing plants or be mixed with plants of equal height. Valerian is a good companion plant in the vegetable garden because it attracts earthworms. We all know how important these crawlers are for aeration of the soil.

Reflecting on its medicinal history and usefulness in the garden we should not be surprised that this tenacious herb has persisted in spite of its "odorous reputation". I hope you can find a place for this fascinating plant in your landscape. Keep it separate from Jupiter's beard because they look so much alike!

I have met many gardeners who distain the common Jupiter's beard (centranthus ruber) because of its invasive and droopy qualities. I find that planting them around my roses gives the deer something else to dine on. I would not do that with the herb valerian.

I hope this answers your many questions about centranus ruber (Jupiter's beard) versus valerian\ valeriana offininalis (garden heliotrope). Don't let those nursery labels fool YOU! Enjoy plant shopping with your new herbal wisdom. Contact me at http://www.herbbasket.net with your column suggestions and questions.