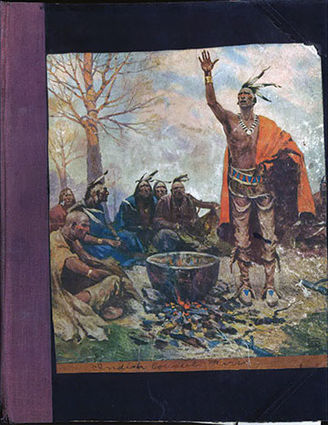 Believe it or not, I discovered a box full of things from my mother that I didn't know I had.

I stuck it in my closet when I moved to Tehachapi, and assumed it contained old photos. It actually contained all sorts of things, including an eighth grade project my mother, Marion Deaver, completed on California History.

She was born in 1907 and compiled a book about the state IN 1921 when she was 13. When I first looked at it, I thought it was a book on California Missions. It was much more. She listed all the missions in the first few pages. When I got into it more, I discovered a history of "Indians" (not referred to as Native Americans until much later) and industries of Kern County.

Her name was Marion Mack until 1931, when she married my father, Paul Deaver. She had no middle name and after marrying my father she used Mack as her middle name.

Her project was written from January to May of 1921, presumably as a semester project. The front of the 8.5 x11" book was covered with a color print of what she described as an Indian Council Fire. Other copies of photos included a photo of the "monastery of Mission San Fernando," various clipper ships, and President Harding and his cabinet.

My mother included lists of things like early world explorers, Spanish Governors of California, as well as the California Missions.

When I was in the fourth grade, we studied California missions, and actually took a field trip to San Fernando Mission. It was the first field trip I had ever taken, and I fell in love with the mission. I loved the idea of how they were created up and down the state. At the time, it did not occur to me how the Native Americans provided free labor to build them and grow the crops.

Later that year, my parents drove up to the northern part of the state to see my grandmother. On the way home they took me to see several missions and again I was entranced with getting to see them.

As an adult, I took my youngest son to see missions in Santa Barbara and San Luis Obispo, and he enjoyed them as well. I think my mother had something to do with me liking them so much.

But back to the book, in it I found a story she wrote as though she were a young "Indian" girl. She said she lived with her family in a small village in California. "Our people were tall and well-formed and we were the most advanced of all California Indians," she explained.

She noted that the village had little government and that the family was the nearest thing to a social unit.

She added that there were many languages, with 19 alone around the San Francisco Bay area. Their food consisted of berries, fish, seeds, and small animals, including reptiles. Their clothes, she explained, were not much and sometimes in the winter they rubbed themselves with mud to stay warm.

Keep in mind this was written in 1921, and more information about Native Americans has no doubt surfaced since then.

"I suppose you do not think we are very civilized, but we have managed to exist anyway," she concluded.

I can see that her writing ability was well-developed in junior high. She did not get lower than 85% on any of the projects in the book and received a 98% overall and a comment of "excellent."

She passed her love of learning to all of her three children. All of us were reading when we were in kindergarten, and all of us are pretty darn good writers.